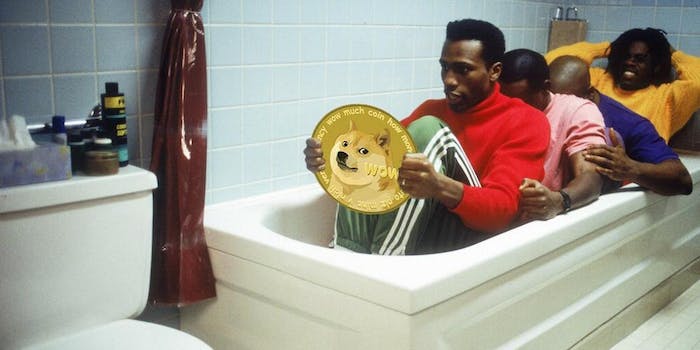 Dogecoin is sending the Jamaican bobsled team to the Olympics

Get your Cool Runnings jokes ready.

Dogecoin enthusiasts are sending Jamaican bobsledders to the moon.

Hungry for a positive, huge stunt, Dogecoin enthusiasts have committed nearly $30,000 worth of their meme-themed cryptocurrency to help the fabled Olympic underdogs, who have turned to the Internet to help send them to the Winter Games in Sochi, Russia.

Dogecoin works on the same basic principle as Bitcoin, though it’s only worth a fraction as much. It’s based on doge, a meme declared dead at the end of 2013, though the coin itself has taken on a culture of its own. Those factors combine to help its users trade it far more frequently, often in the form of tiny transactions and tips.

So it’s thematically appropriate, somehow, for the first big project for the Dogecoin community to rally around is funding the Jamaican bobsled team, made famous in the Disney movie Cool Runnings and represented today by two men who only Monday qualified for the Olympics. They’ve set up an Indiegogo campaign, which as of this writing had only reached a fraction of its $80,000 goal.

Enter Dogecoiners. Skipping the official campaign entirely (for some reason, Indiegogo doesn’t accept any dog-themed cryptocurrencies), they’ve given 26 million dogecoins to the Dogecoin foundation in the Jamaican bobsledders’ name. Early Monday morning, the foundation started converting the Dogecoin to Bitcoin, which is “a more stable currency,” as one of the foundation’s representatives, Laika, explained on Reddit, presumably aware of the irony.

“Because I live in Australia, I’ll be contacting Billy Markus (one of Dogecoin’s founders) in the US to receive the funds and transfer them, most likely to the team’s paypal account,” Laika later said to the Daily Dot.

So the foundation is currently sitting on 35 Bitcoin, currently worth about $28,850, just waiting to go buy some plane tickets and bobsleds.