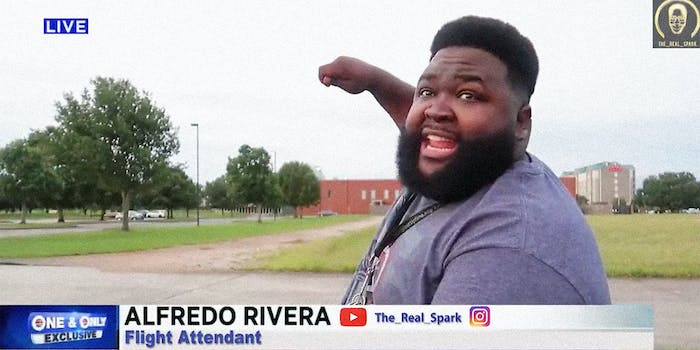 Twitter users are being fooled once again by fake news videos.

A popular YouTube comedian is once again fooling the public after editing himself into a recent news report about an unruly airline passenger.

An intoxicated 22-year-old man was duct-taped to his seat during a Frontier Airlines flight from Philadelphia to Miami on Sunday after groping two flight attendants and assaulting another.

Footage of the incident, which resulted in several flight attendants being placed on paid leave pending an investigation into the matter, was widely covered across the media.

One such news report began circulating on Twitter this week and gained widespread attention over its interview with “Alfredo Rivera,” an alleged flight attendant who was onboard during the incident.

One Twitter user who shared the video earned nearly 80,000 retweets as a result, allowing the footage to rack up more than 8.1 million views.

Prominent Twitter users shared the video as well, praising the alleged flight attendant for his expressive and humorous recounting of the event.

But the man in the video is not Alfredo Rivera. The actual Alfredo Rivera, a passenger who witnessed the assault, can be seen during a recent interview on ABC’s Good Morning America.

The alleged flight attendant from the viral newscast is actually James Bates, a prominent YouTube comedian commonly known as “The Real Spark.”

Bates shot to prominence in 2017 after editing himself into a news interview about home intruders. Since then, Bates has repeatedly fooled the public with his comedic skits.

The edited video was uploaded to YouTube by Bates on Wednesday and has over 1.6 million views.

Twitter users were previously fooled by Bates just last month after he uploaded a video in which he claimed to be a union representative outside of a protest at a Frito Lay factory.