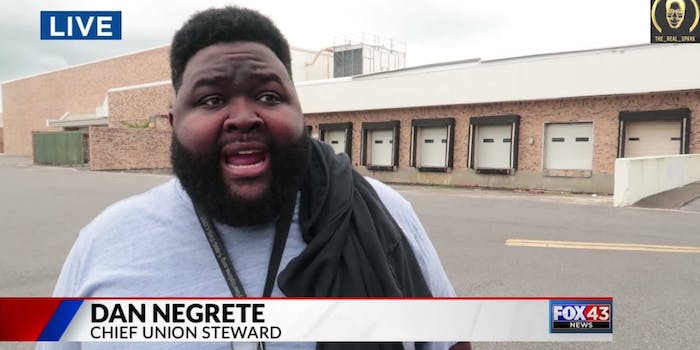 The video is actually from a comedian and can be found on YouTube.

A video purporting to show a union steward being interviewed during a strike at food manufacturer Frito Lay has gone viral online—yet the video isn’t real.

The footage, which shows a man criticizing the company’s working conditions, went viral across Twitter on Friday and was cited by many popular pro-union accounts.

“Get yourself a union steward who knows how to be quotable on the strike line: ‘They got us working 84 hours a week. Does it look like my shoes can hold my fat ass for 84 hours?’ #FritoLayStrike #1u,” @MarchOnTheBoss tweeted on Thursday. The video had been viewed more than 116,000 times.

The video was amplified by numerous high-profile users including @JoshuaPotash, a left-wing political commentator with more than 155,000 followers.

“The Union steward at the Frito Lay strike is too good at this,” he tweeted.

While it is true that a strike is currently taking place at at a Frito Lay plant in Topeka, Kansas, the video in question has been highly-edited by a popular YouTube comedy channel known as The Real Spark.

The strike, which is now entering its third week, was launched by workers due to the plant’s “long hours, forced overtime, stagnating wages and a diminished quality of life,” according to KITV4.

A recent interview with union leader Dan Negrete clearly shows a different individual than the one going viral on Twitter.

The comedian behind The Real Spark, James Bates, has garnered tens of millions of views online by editing himself into news interviews. The Daily Dot was unable to reach Bates for comment, we’ll update this story if we hear back.

Bates originally uploaded the clip posing as the union steward on July 15. A YouTuber claiming to be Negrete even appears to have commented on the video. The account was created on July 16.

“Hey, it’s the real Dan Negrete from Topeka Ks, these last few weeks have been pretty wild and stressful…This made my day !!” the account claiming to be Negrete wrote. “You had me rolling when I woke up… If you would of put on a black bandana when you made this I would of died from laughing…”

The Real Spark responded to the comment five days ago: “Wait the real Dan Negrete!! That’s crazy. Glad I could put a smile on your face man.”

While the satire video continues to go viral online, it appears at least some users are learning that they were duped. Potash later admitted that the video did not appear to be genuine.

“Damn looks like he truly is too good but he’s still a hilarious comedian with this great pro-worker content!” he wrote.

Bates is best know for producing a 2017 video in which he edited himself into a news interview about home intruders.