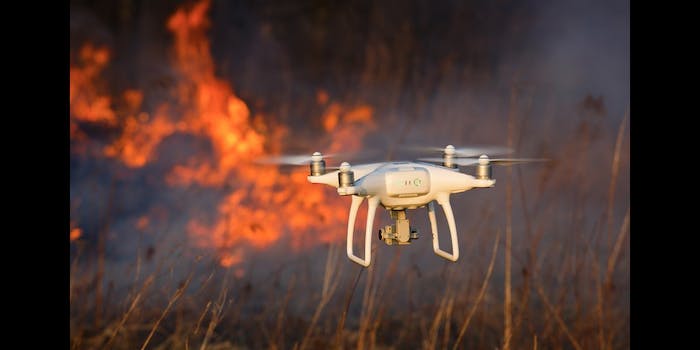 Drones with flamethrowers are a terrible, terrible idea

What’s more terrifying than a drone but more destructive than a flamethrower? Flamethrower drones! Such a contraption is the stuff of mad scientists’ fevered daydreams. However, it isn’t merely an action movie fantasy anymore: Flamethrower drones exist.

One was caught on video (and shared to Twitter and YouTube) earlier this week. The drone uses its flamethrower prowess to burn a large piece of netting or tarp off of a power line. Once the debris is successfully flamed in half, it drops to the dangerously dry-looking field below.

Naturally, the internet had a variety of reactions to this piece of absurdity.

On the next episode of "What Could Go Wrong?"… https://t.co/FJP6MjDLRy

I didn't know what I wanted for my birthday, but now I do. A drone with a flame thrower. Done. https://t.co/EHwSaJIKXt

While this particular flamethrower drone appeared to have successfully completed its task without causing the power line to explode or starting a massive brush fire, there are plenty of other, safer tasks we should perhaps be focusing our drone efforts on. Beer delivery, accomplished in Iceland, is one such feat. Burrito deliveries are another mostly safe, worthwhile drone activity.

Even a drone with a saw attached seems like another slightly safer alternative, with regards to fire safety, at least. But a saw-wielding drone might also cut that power line in half if it flew off-course, so maybe not.

There does seem to be precedent with flamethrower drones being used to clear debris from power lines. Last year in China, video of a similar incident surfaced.

It’s not any less insane to watch, though.

As long as flamethrower drones remain in the hands of practiced professionals and are only used in very specific scenarios, I suppose we’ll still be able to sleep at night.