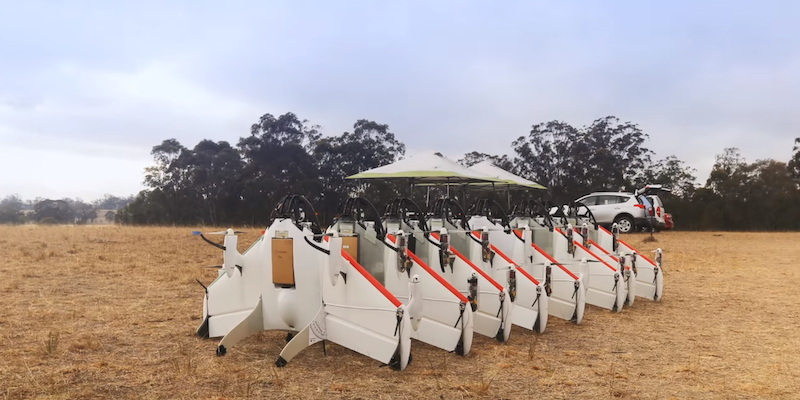 Screengrab via x, the moonshot factory/YouTube

Alphabet will use its hybrid drones to deliver burritos

The drones will deliver directly to people's backyards for the first time.

Finally, a use for drones everyone can get behind: Google’s parent company is testing a drone concept that will deliver burritos to rural Australia.

Alphabet’s X lab will team with two Australian companies, the Mexican food chain Guzman y Gomez, and Chemist Warehouse, a chain of pharmacies, to deliver burritos and medication, ensuring that recipients won’t have to take any drugs on an empty stomach and, more importantly, cutting down on delivery times for those living outside of towns. Testing will take place in the Australian Capital Territory where some residents live 40 minutes round trip in a car from essentials.

Project Wing will use hybrid drones that can both glide through the air like a plane or hover in place like a helicopter.

In a blogpost, Project Wing’s James Ryan Burgess explained how “thousands of flights” have already been conducted to get drone delivery ready for everyday use. Its first test took place at Virginia Tech University in late 2016—and it too involved burritos—but government regulation meant deliveries had to be made in a large open field, not directly to student living areas. Australia is more lenient and will allow X to deliver right to people’s backyards for the first time.

This presents a new challenge for X. It will no longer deliver in an environment void of any obstructions. Instead, each backyard delivery will be unique and come with its own set of obstacles. Using a preplanned flight path and onboard sensors, Alphabet will expose its drones to different environments, which means its algorithms should grow smarter for safer and more efficient delivery.

“We have to incorporate customer preferences — e.g. many of our testers would like packages delivered to backyards so they’re not visible from the road, or near kitchens so food items can be unpacked quickly,” Burgess said. “And we have to be ready to accommodate changing conditions at the delivery location.”

Because its customers will be delivering a variety of different items, X will need a way to load products without specialized equipment. To that end, the company will use a long cord that drops to the ground and is then winched up by the Wing.

“In the case of Guzman y Gomez, who is our first delivery partner for this trial, we’ll need to make sure our technology fits in smoothly into their kitchen operations, as their staff have to juggle many orders at once to ensure that every customer is served fresh, hot food in a timely fashion,” Burgess wrote.

While Amazon wants to use drones to deliver its products and cut out the middleman, Alphabet’s ambitions are less clear. It appears the conglomerate is finding new use cases as it tests the technology, instead of building it for one dedicated purpose. Some of the other uses mentioned in the blog post include assisting emergency services during fires and floods and helping small businesses make deliveries out of their homes.