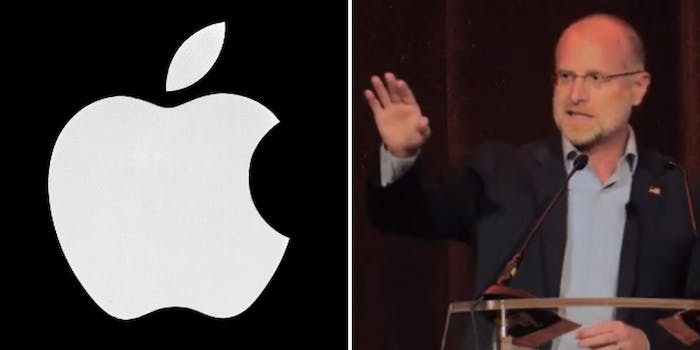 Carr wants Apple to allow the Voice of America app on iPhones.

FCC Commissioner Brendan Carr is calling out Apple over the company’s censorship in China, according to a letter he posted to Twitter.

Carr, in his complaint, quotes a speech given by Cook in Washington last week, contrasting the CEO’s words with his actions in China.

Ironically, Cook’s speech was about preventing the U.S. government from wresting control of the App Store away from Apple.

“You expressed Apple’s ‘commitment to protecting people from a data industrial complex built on a foundation of surveillance,’” Carr wrote, quoting Cook’s speech. “And you spoke out forcefully against a reality in which ‘technology is exploited to rob humanity of that which is foundational’ as ‘a loss we cannot accept.’ I am concerned that your words in Washington founder upon the harsh reality of your actions in China.”

Voice of America, according to the letter, has a mobile app that “allows users to access unfiltered news content” and “safeguards user privacy by including built-in support for circumvention technologies.” Carr said the app is especially important in places with authoritarian regimes, like China, but that it isn’t available on iPhones in the country.

Voice of America is a state-owned international news service run by the U.S. Agency for Global Media. Established in 1942, it is a tool in U.S. diplomacy abroad but has been cited by many as a propaganda arm of the government. Carr said the censorship of Voice of America—and Apple’s continued cooperation with the Chinese government—only benefits China.

“Continuing to partner with brutal regimes like Communist China only provides them with tacit—if not explicit—support and emboldens those bad actors,” Carr wrote. “It provides them with a veneer of openness and legitimacy, while allowing them to surveil individuals and limit their human rights.”

Apple said in a statement to the Daily Dot that the app was disabled in 2017 because it lacked an appropriate license to operate in China.

“We are required to comply with local laws where we do business, even though we may sometimes disagree,” the company said. “The app remains available for download in other countries.”

Carr did not immediately respond to a request for comment.