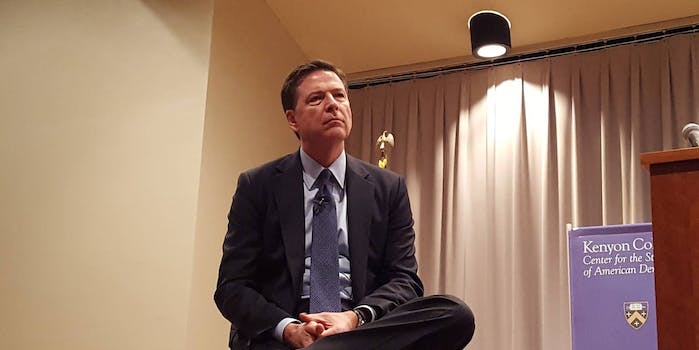 The letter accuses Comey of having 'lost touch with reality.'

A combative pro-privacy group is calling on the director of the Federal Bureau of Investigation to resign over his leading role in the government’s encryption battle with tech companies.

In an open letter to FBI Director James Comey, the activist group Fight for the Future tells Comey that he has “lost touch with reality” and accuses him of pursuing a “misguided crusade against basic encryption technology.”

Comey has been the leading voice in the latest phase of a long-running campaign to require tech companies not to use unbreakable encryption.

Some law-enforcement and intelligence officials say that the rise of encryption is preventing them from accessing data vital to their investigations, a problem that Comey has called “going dark.” He and his supporters, including Manhattan District Attorney Cyrus Vance, Jr., want Silicon Valley firms to only apply security protections to user data if they can reverse those protections when presented with a warrant.

But privacy and civil-liberties groups like Fight for the Future, backed by the vast majority of independent security researchers and cryptography experts, say that warrant-friendly encryption is also susceptible to exploitation by rogue hackers or foreign spy agencies. They argue that the only way for tech companies to stay ahead of hackers and digital thieves is to use the most powerful encryption available, with unbreakable encryption being a net benefit to society.

This dispute between government officials and technologists, known as the “crypto wars,” reached its most public level when the Justice Department demanded Apple‘s help bypassing security features on a dead terrorist’s iPhone as part of an FBI investigation into whether the man had contacted other extremists.

Comey consistently defended the FBI’s request for the court order, earning withering criticism from the privacy and security communities.

Evan Greer, the campaign director at Fight for the Future, said in an email that the letter was designed to send a message and acknowledged that it would not prompt the resignation of Comey, whose 1o-year term ends in 2023.

“I think this is more one of those ‘someone had to say it’ situations,” she said. “The goal of the letter is to show that Comey is isolated and extreme. Do I think he’s just going to read this and suddenly decide to resign? Probably not. But he’s increasingly losing credibility in D.C. and beyond, and we think this effort will help continue to highlight that.”

“Director Comey,” the letter says, “you’re off the rails and your extreme behavior is putting lives in danger.”

The FBI did not respond to a request for comment on the letter.