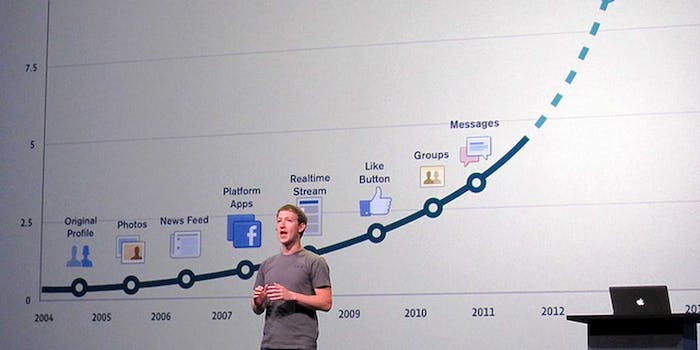 Facebook figures out we want to see updates from people, not pages

Let's be real: status updates are lame unless they're posted by your friends.

Finally: Facebook might start showing you activiy from actual people you know. The social network recently found in a study that people are more likely to update their statuses if they see their friends doing the same. More engagement means more traffic, so the company is changing its News Feed content to display more posts from friends and less from official pages.

Displaying more updates from your friends caused a huge increase in statuses in general: During the experiment, Facebook saw 9 million more updates posted from user than the site does on average.

Until this study, Facebook grouped together both types of posts into one category, meaning page posts were treated just like a friend’s post. It seems overly obvious that seeing something written by someone you know rather than an official page would encourage you to do the same, but apparently Facebook needed to test this out first.

But Facebook is the bread and butter of these official pages, and the platform doesn’t want to slight them with this change. In a blog post about the update, News Feed Product Manager Chris Turitzin provides some advice to help keep pages above the water:

“We’ve found that, as compared to sharing links by embedding in status updates, [link-share] posts get more engagement (more likes, comments, shares and clicks) and they provide a more visual and compelling experience for people seeing them in their feeds.”

Turitzin is referring to the difference between simply pasting a link into the status box (which will then just show the URL), and embedding the link so that Facebook can grab more information from the site you’re trying to send people to, like photos and videos associated with the URL.

As for users, your News Feeds are about to become a little more friend-filled. And as for pages, you’ll need to very slightly step up your game to get those eyeballs.