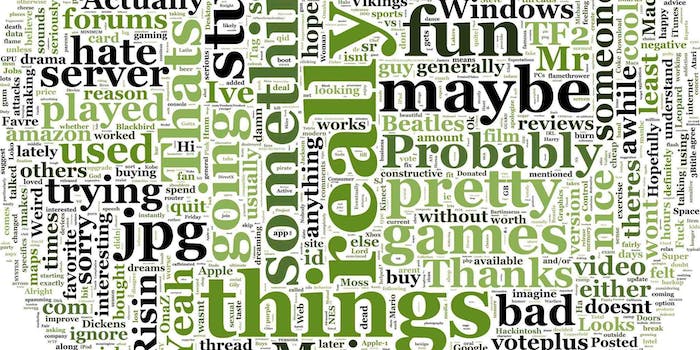 Maybe your most used words should be, "better security."

What are your most used words on Facebook? Millions of users of the social network used an app to find out, but now that app knows a considerable amount more about them then just what words they use.

The Most Used Words app from Korean developer Vonvon has been used by over 17 million users and has received considerable press coverage. The app purports to scan posts made by the user to generate a word cloud of their most frequently used words.

However, the app has been digging much deeper into profiles than just posts. According to tech comparison and review website Comparitech, the app is also granted permission to just about every bit of data recorded by Facebook, including information like name and age, friends list, post history, photos, education, hometown and current city, likes, IP address, and information on the device used to access Facebook.

While Most Used Words isn’t the only app to collect an excess of data from users, it is a particularly bold example. The app is extremely popular and it’s been doing far more in the background than users expect.

Even more concerning than the amount of information scooped up by the app is what Vonvon can do with it all. According to the company’s privacy policy, the information it gathers can be stored on its servers “at any location” in the world, potentially giving the company the ability to bypass privacy protections granted by the country of the user.

The privacy policy also states that Vonvon retains the right to “use any non-personally-identifying information,” even after users stop using the app. While the company promises not to sell information to a third party company without giving notice, it considers stating in its privacy policy that that it’s selling the information as sufficient enough notification.

In a statement to Comparitech, Vonvon CEO Jonghwa Kim attempted to quell any concerns about privacy violations, stating, “We only use your information to generate your results, and we never store it for other purposes.” The company CEO went on to say that because it doesn’t store any information, “we have nothing to sell. Period.”

Kim said that Vonvon has since adjusted some of its permission requests to better address security concerns of users, but explained, “We have asked our users for a comprehensive list of access privilege so that they can enjoy our vast library of quizzes as smoothly as possible.”

If you have already installed and used the Most Used Words app from Vonvon, you can retroactively revoke some of its privileges to protect some of your privacy. Visit your Privacy settings on Facebook and find the Apps tab. From there, you can edit the excessive permissions of the app or delete it completely.

Better yet, if you aren’t one of the 17 million that have already fallen into the data trap, just don’t install the app at all.