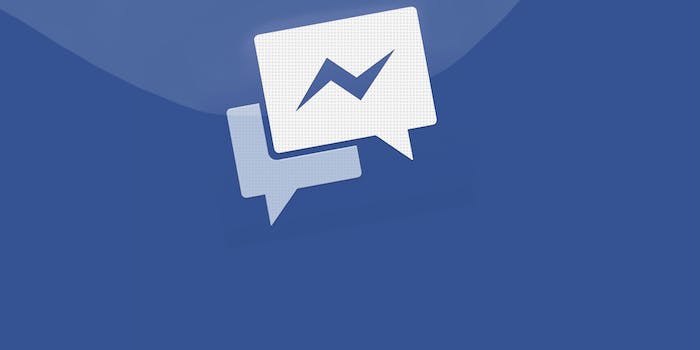 We were warned by Mark Zuckerberg last November, but now it’s really happening: Facebook has started notifying users that they will no longer be able to send or receive chat messages from within its Android and iOS mobile apps.

“Today we are starting to notify people that messages are moving out of the Facebook app and over to the Messenger app. To continue sending messages on mobile, people will need to install the Messenger app,” a Facebook spokesperson told the Daily Dot.

Is this a way to force users to download Messenger? Totally. Not that Facebook would characterize it as such. After all, when Zuckerberg mentioned the upcoming change to TechCrunch’s Josh Constine last November, he talked about it like he was bringing chat out of the ghetto. “The other thing that we’re doing with Messenger is making it so once you have the standalone Messenger app, we are actually taking messaging out of the main Facebook app. And the reason why we’re doing that is we found that having it as a second-class thing inside the Facebook app makes it so there’s more friction to replying to messages, so we would rather have people be using a more focused experience for that,” Zuckerberg said onstage.

This will annoy people who don’t already have Messenger, but in Facebook’s defense, Messenger has a much better set-up than the in-app chat did. I deleted Messenger and Facebook from my phone because I already check it enough on desktop, but I’ve used both to check chats, and Messenger is an undeniably more pleasant experience. So at least they’re not forcing users to switch to an inferior product. Facebook has found that people get replies 20 percent faster on Messenger than they do using the in-app chat, so this switch might even improve your chatting experience, as long as you’re not too salty about the change to download Messenger. And the company plans to give people several notifications before actually yanking the native chatting function, so this won’t happen without plenty of advance notice.

It might seem like an odd move considering Facebook shelled out $19 billion earlier this year to purchase WhatsApp, another mobile messenger app, but the company has emphasized that WhatsApp will continue to operate independently.