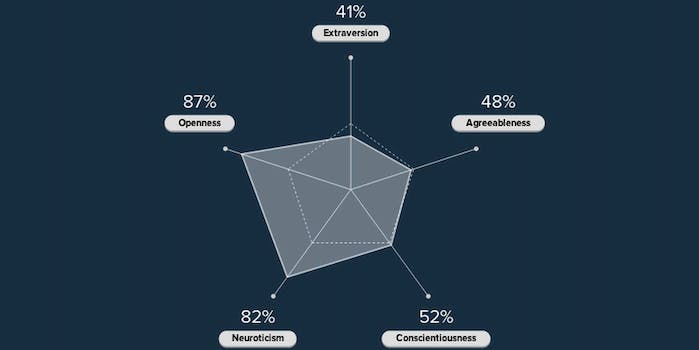 Five Labs personality test only needs Facebook to analyze you

You actually already filled out this personality test. You just didn't know it.

Whether it’s for a job application, psychological evaluation, or good old-fashioned curiosity, everyone loves a good personality test. All you have to do is answer a few telling questions crafted by scientific researchers, and the test reveals what makes us tick.

But now we don’t even have to manually answer those questions for someone to glean details about our personalities. Because we so conveniently put it all online.

To show just how much an interested party could learn about us, a California-based startup called Five teamed up with researchers from the University of Pennsylvania to build a tool it’s calling Five Labs, which analyzes your Facebook posts to determine personality traits. Five Labs, which launched for public use earlier this week, evaluates people on what psychologists call the “Big Five” personality traits: openness, conscientiousness, extraversion, agreeableness, and neuroticism.

“It’s important because this tool shows that it’s possible to extract really sensitive information about people without [them] actually ever explicitly providing that information,” Nikita Bier, Five’s co-founder, told the Daily Dot.

Bier pointed out that big Internet companies, ranging from giants like Google and Facebook to small startups, are investing millions in data mining or “deep learning” technology. The reason for this is that marketers and advertisers will pay a pretty penny for any information that helps them better target their efforts.

Data mining and demographic analysis is certainly nothing new in advertising. Mad Men fans following the current season realize that advertising companies have been using computing technology for more than 40 years.

But it’s the relatively recent increase in popularity of social media sites over the past decade that has facilitated an explosion of readily available personal data that’s ripe for the picking by anyone with the technological savvy and will.

Using Five Labs, Bier said Five has already run personality tests on about 60 million individuals, or roughly 5 percent of all Facebook users. The software is conducting about 2 million tests per hour.

So lucky for us, Five Labs’ goal is not to help out marketers.

“We built the tool largely as an educational piece,” Bier said. “We have no interest in selling the data.”

My own personality evaluation on Five Labs revealed that I score highest on openness and neuroticism, and lowest on extraversion. To get a sense of its accuracy, I took a more traditional version of the Big Five personality test that was available online. The 45-question inventory told me I score highest in conscientiousness and agreeableness and again, lowest in extraversion.

What’s even less surprising than the fact that I’m not an extrovert is that my online personality doesn’t exactly match up to my real life personality.

For Bier, the point of Five Labs is not to provide a psychologically rigorous personality evaluation, but rather to show how possible it is to begin to build a profile of someone based on their social media posts.

He said that the company plans to follow up this work by launching a privacy-focused online communication tool in about two months. While Bier didn’t reveal many details, he said it would be a mobile app that “will provide a safer place where people can interact, where data isn’t being recorded, and where you can’t really derive any of excess details about people.”

As the public becomes increasingly self-conscious about the amount of personal data it’s sharing online, companies like Five and others are betting that they can commoditize privacy like today’s Internet companies have commoditized information-gathering.

Clarification: An earlier version of this article said “about 2 million users are accessing the test per hour.” While the test is being conducted roughly 2 million times per hour, it is unclear how many unique users are involved.