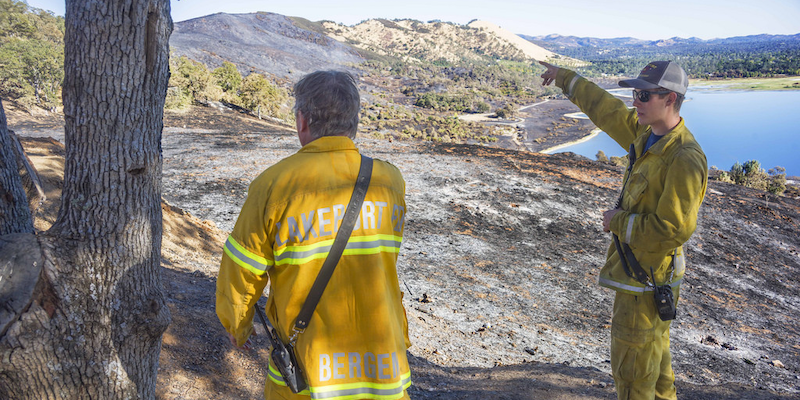 How to ensure you receive emergency alerts on your phone

Signing up for your county's alert system could save your life.

The night of Oct. 8, residents in Santa Rosa, California, woke up to the sounds of high winds, the smell of smoke, and the orange glow of what would be known as the Tubbs Fire looming brightly in the distance. For many, their only warning of the oncoming danger was these signs—and the panicked knocking of neighbors on their front door. Thus far, the still-raging Northern California wildfires have claimed 40 lives, with another 174 still unaccounted for.

As the winds have died down and firefighters are slowly containing the separate blazes, many are starting to wonder, though: Why weren’t we alerted that a fire was speeding our way? In an age when every smartphone in the state goes berserk for an Amber Alert, why were some Santa Rosa residents notified they should evacuate, and others weren’t?

The issue lies in our rapid-fire adoption of cellphones. Back in the day when everyone had landlines, counties populated their phone-based emergency alert systems with numbers from telephone carriers. The Reverse 911 Law, which enabled law enforcement to make outbound calls to your phone, guaranteed your phone number was shared with emergency agencies—but it was written before cellphones were so prevalent.

Today, roughly half of American households have abandoned landlines, and because the Reverse 911 law doesn’t apply to cellphones, it’s more difficult for county officials to gather citizens’ numbers. On top of that, officials can’t simply use a broad alert system that sends a message to every cell number in the area. In the case of the Santa Rosa fires, some homes were in imminent danger while others weren’t. Had officials notified every single resident to evacuate—Amber Alert-style—roadways would have gotten even more clogged with car traffic. It’s possible that more lives would have been lost. In fact, bumper-to-bumper traffic forced some residents to flee the fires by bicycle.

So today, in many counties, receiving emergency phone alerts is completely opt-in. You need to head to your county’s website, give them your cellphone number and other information, and then you’ll be alerted in the case of a major, evacuation-level emergency. There is no unified system across the country, and there doesn’t seem to be a one-stop database where you can easily sign up for your county’s emergency alert system. (Ready.gov, whose system can send imminent threat, AMBER, and presidential alerts, would be the logical place to house such a database.)

To sign up for an emergency alert system in your area, Google your county name and “emergency alert.” In San Mateo County south of San Francisco, for example, you need to head to the SMCAlert website. There, you can create an account with your email, phone number, and address. For those in and around Austin, Texas, you should go to the Warn Central Texas website to sign up for phone-based alerts. The county will then notify you in the case of emergencies or other opt-in scenarios, such as major road closures. Cities such as San Francisco and Chicago also have their own alert systems.

Once signed up, you’ll want to make sure you keep your address information up to date. This should help ensure you only receive alerts that are relevant to you and your neighborhood—and that you don’t miss out on important messages, either. On iOS and Android, these alerts should go through even at night when your phone may be on Do Not Disturb.

For now, this is the best way to ensure that you receive phone-based alerts in the case of an emergency or natural disaster.