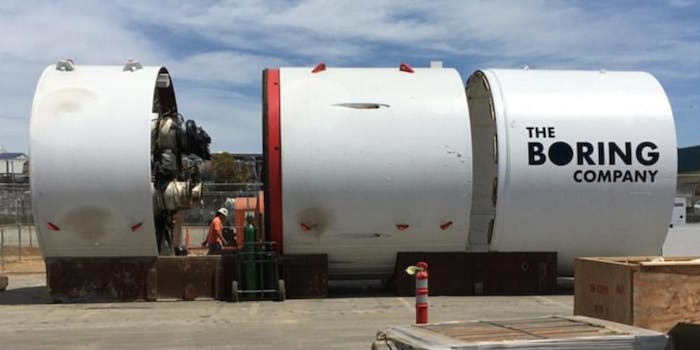 Photo via The Boring Company

Elon Musk just got permission to build a hyperloop from New York City to D.C.

It would take just 29 minutes to travel more than 200 miles.

The hyperloop may be coming a lot sooner than any of us expected.

Elon Musk tweeted Thursday that he received verbal government approval to build a hyperloop between New York and Washington, D.C., with stops in Philadelphia and Baltimore. The four-hour drive from the city center of New York City to the heart of D.C. would take just 29 minutes in a hyperloop pod.

City center to city center in each case, with up to a dozen or more entry/exit elevators in each city

Musk followed with more details about the proposed route, adding there could be a dozen or more entry/exit elevators in each city.

City center to city center in each case, with up to a dozen or more entry/exit elevators in each city

Hyperloop is a high-speed transit system concept created by Musk in 2013. A number of startups have tried to bring his vision to reality in recent years, including Hyperloop One, which successfully completed its first ever full-scale test run earlier this month. While Musk has left it up to other companies to create hyperloop, he has grown frustrated by transportation infrastructure in the U.S. His answer is the Boring Company, a tunneling company designed to build a vast network of high-speed transit tunnels underneath our current infrastructure.

The company posted a futuristic demo video of its plans earlier this year:

Here is a video of a 125 mile-per-hour test run in one of the tunnels.

It still isn’t clear which government official Musk spoke to or what sort of timeline he has in mind.

We will update this article when we learn more.