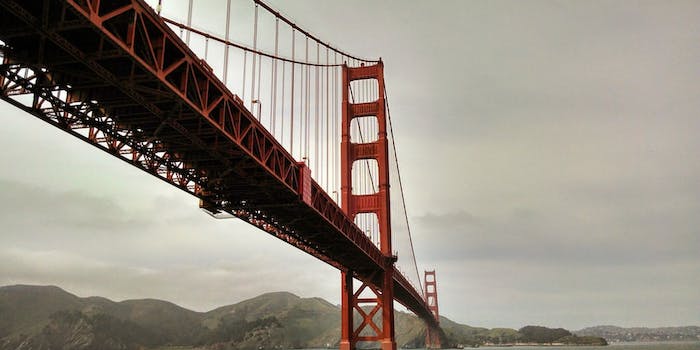 Photo via Travis Wise/Flickr (CC BY 2.0)

Drones are scaring the people who run the Golden Gate Bridge

Golden Gate Bridge officials tell the Marin Independent Journal that drones flying near the city’s bridges are a cause for concern. Some of these officials sent a letter to Sen. Dianne Feinstein (D-Calif.), writing, “The increased presence of these unmanned aircraft is a major threat, and is of significant concern to those charged with the security of the Golden Gate Bridge.”

Brian Sobel, who is described as a “bridge board member,” described the bridge footage taken as “dramatic.” He adds, “It’s HD, it’s clear as a bell, it’s pretty remarkable, and it shows up on all sorts of websites.”

These concerns aren’t very new. Two men were arrested in July after trying to fly a drone near New York’s George Washington Bridge. Their remote-controlled robot came close to crashing into the blades of an NYPD helicopter which was performing surveillance.

Drones have been spotted by pilots around bridges and airports all over the world, causing for some officials, like Sen. Charles Schumer (D-N.Y.), to push for aggressive reforms.

But while safety initiatives like these cause new laws to be closely examined, drone proponents say that the bots can be very useful for bridge inspections. Researchers at Tufts University have been trying to improve drone technologies to catch “subtle defects” in bridges.

The Federal Aviation Administration’s new proposed drone laws highlighted the financial benefits that drones could bring to bridge inspections and other commercial avenues. (A rough estimate is that benefits will “exceed $100 million a year.”) As the Associated Press reports: About 45,000 annual bridge inspections could be conducted with small drones. Most bridge inspections employ hydraulic mobile cranes called “snoopers.” The average cost of an inspection using a snooper is $3,250. Cable bridge inspections are even more expensive because they often require a 200-foot aerial lift.