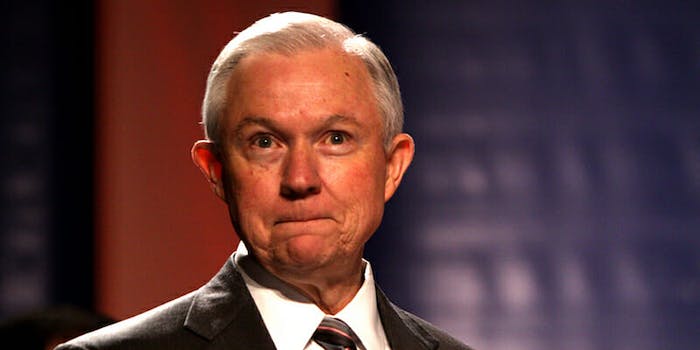 The task force will issue a report by June.

U.S. Attorney General Jeff Sessions has reportedly ordered the formation of a task force to help the Department of Justice fight cyber threats, including efforts to interfere with elections.

The announcement came on Tuesday amid growing concerns about how Russia and other foreign entities could try to use cyber tools to infiltrate the 2018 midterm elections in November.

The task force will examine how people use the internet to spread violent ideologies; steal data on corporations, government, or private citizens; and how encryption can be used to “avoid or frustrate law enforcement.”

News of the task force also came one day after #TrumpColluded trended on Twitter, with people accusing President Donald Trump of conspiring with Russian meddling efforts during the 2016 presidential election.

An indictment made public last week in connection with Special Counsel Robert Mueller’s probe into Russian inference charges 13 Russian nationals and three agencies with spreading disinformation on social media ahead of the 2016 election. Trump has denied collusion between Russia and the Trump campaign.

The DOJ task force, which Sessions has asked to “prioritize its study of efforts to interfere with our elections,” is expected to issue a report by the end of June.