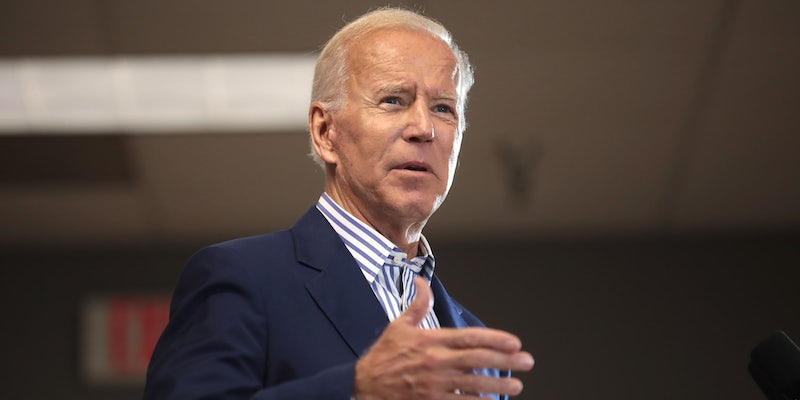 ‘Are y’all serious with this’: Democrats mocked for tweet thanking Biden for 2-cent gas price drop

A prominent Democrat group’s attempt to put a positive spin on gas prices has made it the laughingstock of Twitter.

Gas prices have become a sore spot for President Joe Biden. Although fuel costs are influenced by global factors, many of which the president doesn’t control, Americans have historically credited or blamed whoever occupies the White House for the price at the pump.

Biden’s enemies in politics and media have made a meal of rising fuel costs as gas prices have soared recently.

In an effort to lower prices, last week, Biden announced that he would release 50 million barrels of oil from the nation’s reserves.

Experts say it will take a few weeks before the additional supply affects prices.

Perhaps in an effort to change the narrative, today the Democratic Congressional Campaign Committee tweeted a chart showing that the average cost per gallon has decreased in recent weeks. The tweet is captioned, “Thanks, @JoeBiden.”

Astute observers noticed that, although at first glance the drop seems significant, the chart only reflects a decrease of two cents per gallon. Assuming an average gas tank is 12-16 gallons, that’s just $0.24-$0.32 saved per tank.

People wasted no time to start clowning on the tweet.

Many wondered why someone who presumably has experience in communications thought the chart was a good idea.

“Whatever strategist you hired—is getting paid 2 cents too much,” tweeted @MidwestMutineer.

“If I’d produced a chart like this for a client presentation, I would have been fired on the spot,” added @RobinJosephette.

Several tagged @GraphCrimes, while many mocked the infinitesimal savings.

“Now I finally have two pennies to rub together,” tweeted @WalterChurch123.

In addition to the United States, the British, Indian, South Korean, and Japanese governments are releasing millions of barrels of oil from their reserves, the Associated Press reports. U.S. officials say it’s the largest coordinated release of this nature. But that’s just their two cents.