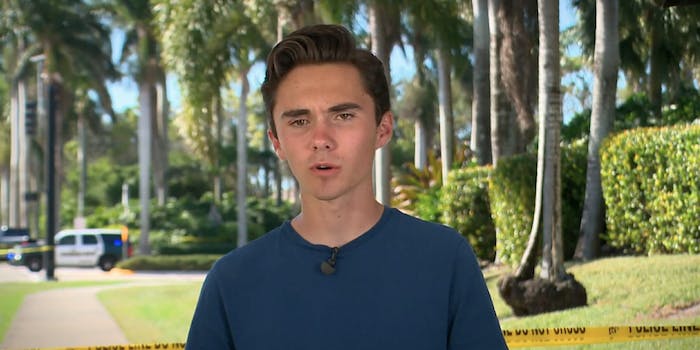 As students at Marjory Stoneman Douglas have pushed hard for gun control in the wake of the shooting that killed 17, conservatives have lept on every possible avenue to discredit them.

David Hogg, who has been one of the most vocal kids from Stoneman, has drawn the right’s ire. He’s been accused of being an FBI plant, and of being a crisis actor.

Although none of these things have been proven, now he’s also being accused of being a 26-year-old felon who committed a crime in South Carolina. From Reddit’s r/conspiracy:

A David Guyton Hogg was arrested in Anderson, South Carolina, but that person Reddit conspiracists are touting bears little resemblance to the student at Parkland.

That loose resemblance was swiftly mocked by Hogg’s classmates, who laughed out loud at it.

@davidhogg111 is smart, funny, and diligent, but my favorite thing about him is undoubtedly that he’s actually a 26 year-old felon from California.

That also loops in another conspiracy that Hogg, because of a YouTube video, is from California. Hogg enjoyed his friend’s tweet.

Hogg’s father this week told Anderson Cooper that his son is not an FBI plant.