Here’s the science behind ‘text neck,’ the new threat to your health

This isn't just an issue of bad posture, but permanent spinal damage.

Dispatching a quick “LOL” or cat emoji to a friend might seem innocent enough, but it’s doing more harm to your health than you think. No, we’re not talking about the perils of texting and driving, but something far more nefarious and troublesome known as “text neck.”

According to new research published in the journal Surgical Technology International, tilting your head down to text, send a tweet, or seeing how many likes your selfie has accrued on Instagram is doing significant damage to your spin. 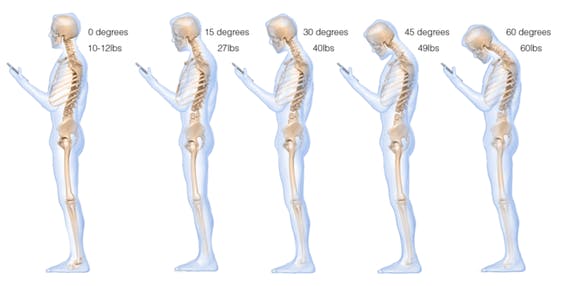 But just how serious could checking your Facebook notifications be? According to the calculations of Kenneth Hansraj, a New York back surgeon, individuals could be placing up to 60 pounds of strain on their neck. Hansraj writes:

It turns out Google Glassholes might be having the last laugh after all given that Hansraj cites slumped necks could lead to “early wear, tear, degeneration, and possibly surgeries.” So until Apple invents a ergonomically correct way to display messages, walk around with a book on your head to reverse the damage you’ve already done to your body.

H/T The Atlantic | Photo via garryknight/Flickr (CC BY 2.0)