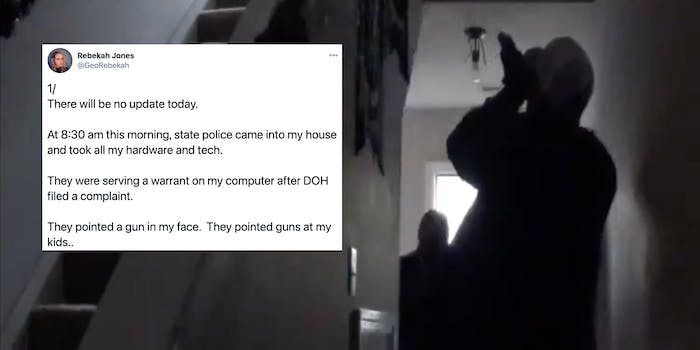 Rebekah Jones says she was fired from the Department of Health for not manipulating COVID-19 data.

A data scientist who was recently fired from Florida’s Department of Health (DOH) had her home raided on Monday by armed police.

Jones said that law enforcement arrived at her home at 830am ET to serve a search warrant and ended up seizing all of her “hardware and tech.”

The warrant was reportedly issued after her former employer filed a complaint. Jones added that the officers on scene pointed a gun both at her and her children during the process.

In subsequent tweets, Jones alleged that she had been let go by DOH for refusing to manipulate data in order to downplay the severity of COVID-19 cases in Florida.

“They took my phone and the computer I use every day to post the case numbers in Florida, and school cases for the entire country,” Jones tweeted.

The data scientists went on to accuse Florida Gov. Ron DeSantis of orchestrating the raid.

“They took evidence of corruption at the state level. They claimed it was about a security breach,” Jones said. “This was DeSantis. He sent the gestapo.”

The Florida Department of Law Enforcement (FDLA) has since released a statement claiming that the raid was linked to a recent hacking incident.

“FDLE began an investigation November 10, 2020 after receiving a complaint from the Department of Health regarding unauthorized access to a Department of Health messaging system which is part of an emergency alert system, to be used for emergencies only,” said FDLE spokeswoman Gretl Plessinger.

According to the Tallahassee Democrat, the FDLE affidavit for the search warrant said that the emergency messaging system had been breached in order to send out a message urging employees to “speak out.”

“It’s time to speak up before another 17,000 people are dead,” the message said. “You know this is wrong. You don’t have to be a part of this. Be a hero. Speak out before it’s too late.”

Plessinger also alleged that Jones had initially refused to answer the door after law enforcement had arrived.

“Ms. Jones refused to come to the door for 20 minutes and hung-up on agents. After several attempts and verbal notifications that law enforcement officers were there to serve a legal search warrant, Ms. Jones eventually came to the door and allowed agents to enter,” Plessinger said. “Ms. Jones’ family was upstairs when agents made entry into the home.”

Jones, who was officially fired for unspecified insubordination charges, has since vowed to continue her work.

“If Desantis thought pointing a gun in my face was a good way to get me to shut up, he’s about to learn just how wrong he was,” Jones said. I’ll have a new computer tomorrow. And then I’m going to get back to work.”