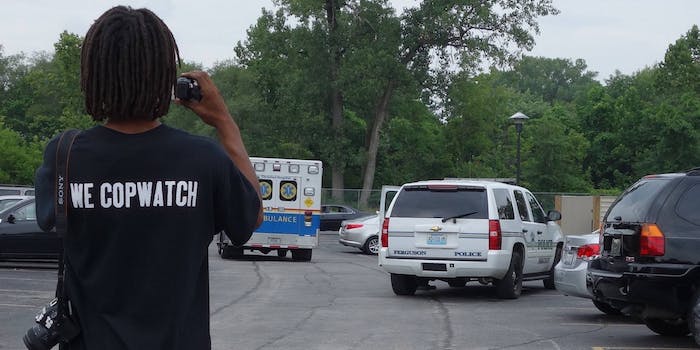 The evolution of Ferguson’s copwatch movement

'The cops have changed.'

“Police,” someone shouts from outside. David Whitt grabs his camera as he dashes out of his apartment. Two more copwatchers go racing after him into the parking lot, where a Ferguson police SUV has just pulled up.

Brown’s death birthed many movements, becoming a symbol of brutal and racially biased policing in America. In Canfield Green, it sparked a copwatch organization called the Canfield Watchmen. Co-founded by Whitt, who lives in the complex with his family, the group has equipped residents with cameras and trained them to film the police in the neighborhood. (In the interest of disclosure, Whitt’s co-founder, Jacob Crawford, and I are friends. In 2013, he contributed public records research to an article I wrote.)

“Copwatching is like a hostage situation—you are trying to get that hostage free.”

The pair of Ferguson officers don’t seem surprised to see a cluster of men in matching copwatch T-shirts filming them from a distance. Whitt and other residents make it a point to film police anytime they enter Canfield, and, after a year of being recorded, the officers appear unfazed—one lounges against the SUV, singing a tune, while an ambulance pulls up. After all, the police are filming, too; Ferguson police acquired body cameras in the wake of Brown’s death, and police and copwatchers alike tout the footage as a tool for greater accountability.

These particular officers appear to be responding to a medical call. After an EMT enters one of the apartments for a quick evaluation, both vehicles leave, and Whitt turns his camera off.

“I’ve already been watching cops my whole life,” Whitt explains the next day. We’re standing a few feet from the heaps of teddy bears, candles, flowers, and balloons that mark the spot where Brown died last year. Whitt,  35, grew up near Washington, D.C., where run-ins with the police were common. “I’ve had encounters with cops ever since I was little, you know what I’m saying? I know how the cops operate. I know what they do,” he recalls. In one incident, Whitt says several officers tried to plant a gun on Whitt, his brother, and their cousin. When the charges didn’t stick, Whitt says the officers tracked him down and beat him in retaliation. “I got beat up real bad,” he says, “and I knew then that you gotta watch the police, so anytime the police would come around, I would keep my eye on them.”

But the concept of using a camera to record what he saw came later.

Cop-watching has grown increasingly popular in the year after Brown’s death, as public attention has focused on police killings. So far this year, 708 people have been killed by police, according to a database maintained by the Guardian. Footage of police interactions with civilians has been invaluable in some cases, but dismissed by officials in other cases—it secured criminal charges against Ray Tensing, the officer who fatally shot Sam Dubose during a Cincinnati, Ohio, traffic stop, but not against Daniel Pantaleo, the NYPD officer who killed Eric Garner in a chokehold.

But civilians aren’t the only ones using video as an accountability tool. The U.S. Department of Justice has pushed for police departments across the nation to adopt body cameras, providing millions of dollars to fund body camera purchases and rolling out a guide on how to develop protocol for their use.

When police come into his neighborhood, the first thing they do is check to see if there are cameras around.

Whitt met Crawford, 37, a longtime copwatcher, during the protests that overwhelmed Ferguson last fall. The pair established the Canfield Watchmen, an offshoot of the Oakland, CA-based group WeCopwatch that Crawford helps organize. Whitt quit his job as a school groundskeeper to focus full-time on copwatching, and he launched a GoFundMe campaign that raised nearly $9,000 dollars to buy body cameras for Canfield residents.

Last September, Whitt and Crawford handed out some of the first cameras bought with their GoFundMe money in one of Canfield Green’s vacant apartments. The body cameras, manufactured by Muvi, were small, easily worn on a lanyard or clipped onto clothing, and packaged in small neon green plastic bags decorated with a skull pattern—bags originally intended to hold Halloween candy.

It was a warm weekend afternoon, but the apartment’s living room was still packed with young men and women, ready to learn about filming the police. Whitt began the hour-long training by describing the differences between a casual stop, a detention, and an arrest. The attendees chimed in to share their own stories about being stopped by police in Ferguson and ask questions about their rights.

Once the cameras were passed out, Whitt and Crawford demonstrated how to use them and how to return the footage to Whitt if it potentially contained evidence of police misconduct. 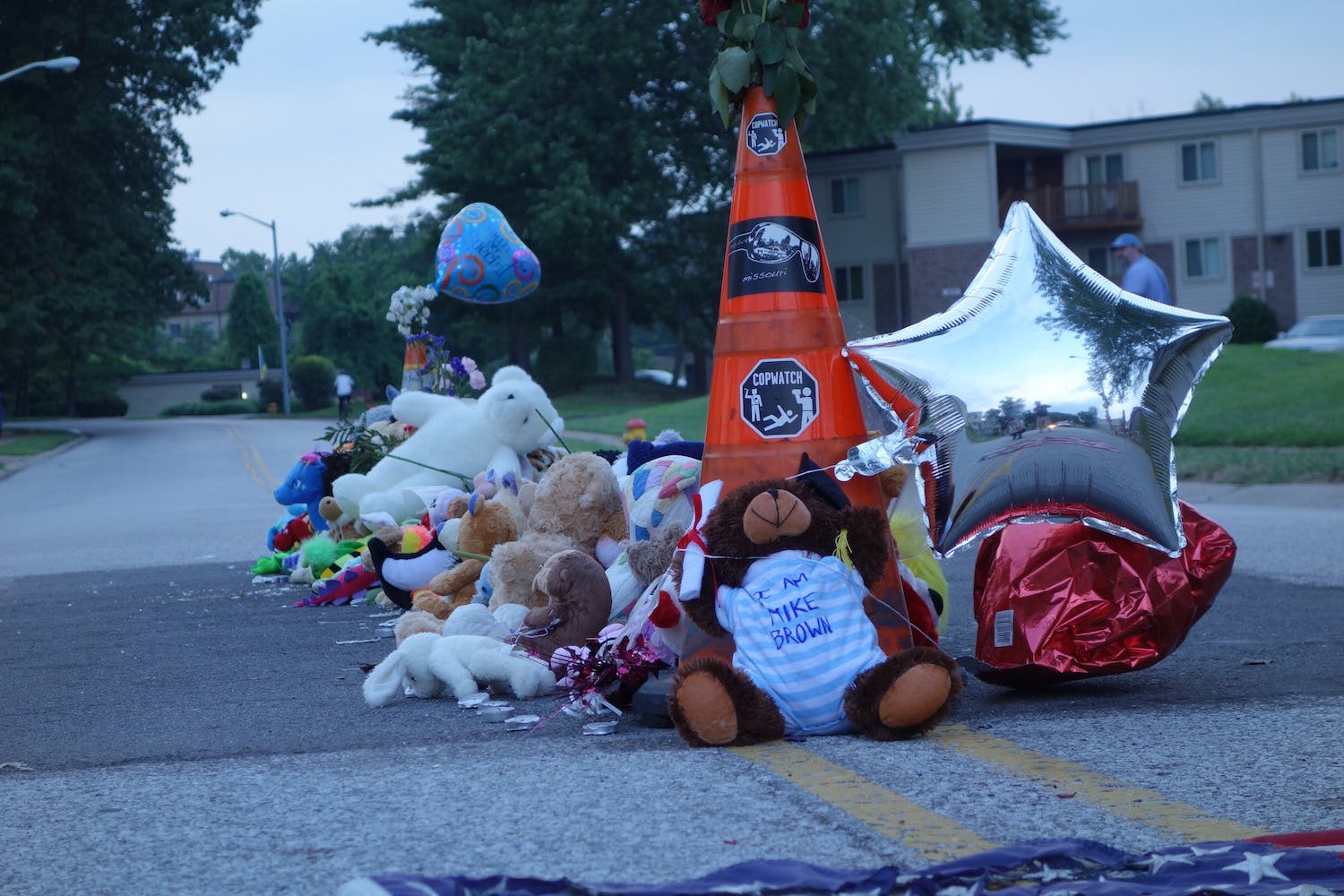 Overnight, it seemed like the body cameras were everywhere in Canfield Green, ubiquitous in the neighborhood where Brown was slain. And although the copwatch movement was being orchestrated by older men, the cameras were particularly popular with the neighborhood kids—a distressing reminder of what they had witnessed and hoped to prevent in the future.

The cameras had the intended effect: “The cops have changed,” Whitt says. Now, he says, when police come into his neighborhood, the first thing they do is check to see if there are cameras around. “With the body cameras, that was a good thing because you won’t be able to see a small body camera,” he says. “If you see a group of guys sitting down over there, you can’t see from your car if they’ve got a body camera, so that’s kind of a deterrent. But then when you got somebody with an actual camera, they come down the street and see it, and they’re like, ‘Yup. Keep going, keep going, keep going.’ So cops won’t have that casual stop to work off of, to try to get information off somebody.”

But the body cameras—unavoidable last year—aren’t such a common sight in Canfield Green anymore. Neither are the kids who wore them. The complex has lost a steady stream of residents throughout the year. In March, the St. Louis Post-Dispatch reported that the 37-acre complex was less than half full as residents moved away to escape the protests and painful memories, while evictions by The Lipton Group, the company that owns the property, also spiked. The complex appears even emptier today. 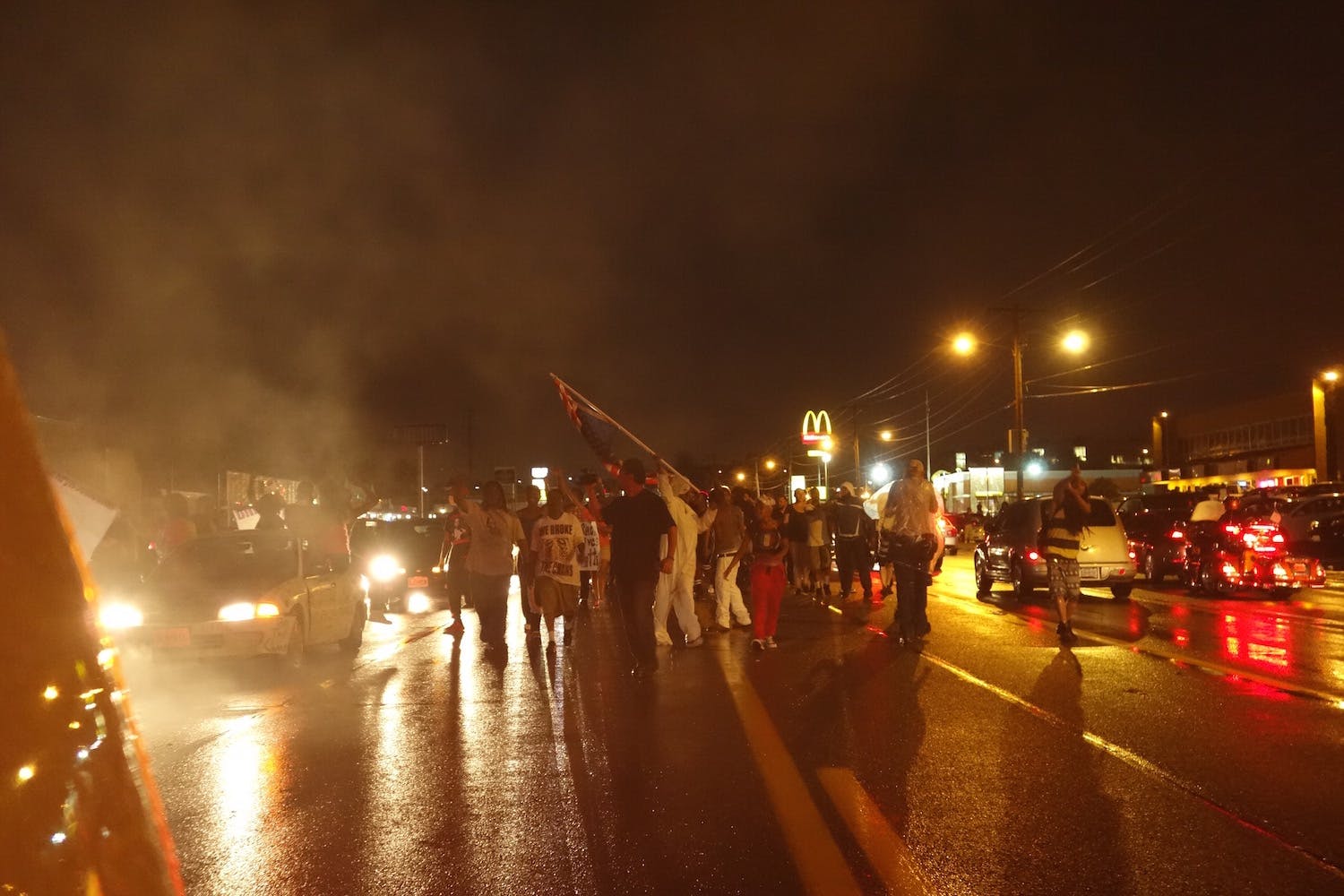 Lipton recently declined to renew Whitt’s lease, a move he believes is an attempt to push his activism out of the neighborhood and is fighting in court. As residents leave or are forced out, there are fewer copwatchers in Canfield than there were last year.

However, as copwatchers leave Canfield Green, the movement grows in other cities. Since he started filming the police, Whitt has traveled to Chicago, Detroit, North Charleston, Oakland, and Baltimore to help establish local copwatch groups. In Baltimore, he and Crawford worked with Kevin Moore, the man who filmed Freddie Gray’s arrest (Gray died in police custody and six officers face criminal charges in his death) to set up a copwatch group. “Copwatch has definitely been constantly growing, it’s been a great success,” Whitt says.

The next hurdle for the Canfield Watchmen and WeCopwatch is establishing reliable funding, so the groups can provide more cameras and trainings across the country. “Copwatch has been progressing,” Whitt says. “But we face our own setbacks because we dealing with a group that’s not an organization.”

Fundraising has been tricky—although the money came through for Canfield’s cameras, there hasn’t been money for cameras in other cities. Whitt and Crawford are trying to change that, applying for 501(c)3 status, so that they can more easily support new copwatch groups.

“Copwatching is different; it’s very special. You are watching the police for the benefit of the person who is detained.”

For now, Whitt is particularly optimistic about his trips to Baltimore and North Charleston, where he feels like copwatch really caught on with the locals. “A lot of cities we go to, some people don’t know what copwatch is about, but they understand the concept of having a camera; and when we’re filming the cops, they’re like, ‘Hell yeah, thanks for having your camera on,’” he says. “Because even though they don’t know all the ins and outs about copwatch, it’s understood that filming the cops works. It changes their behavior.”

The question now is how quickly that change will come.

On the first anniversary of Brown’s death, another 18-year-old black man, Tyrone Harris Jr., was shot by police a few blocks away from Brown’s memorial. As of Monday night, Harris remains in critical condition. Police said Harris fired a gun at a police car and charged him with 10 felonies, but the plainclothes officers who shot him were not wearing body cameras. And although Canfield’s copwatchers were filming near the scene of the shooting, citizen video of the police shooting has yet to emerge.

Correction: Sam Dubose was shot and killed in Cincinnati.