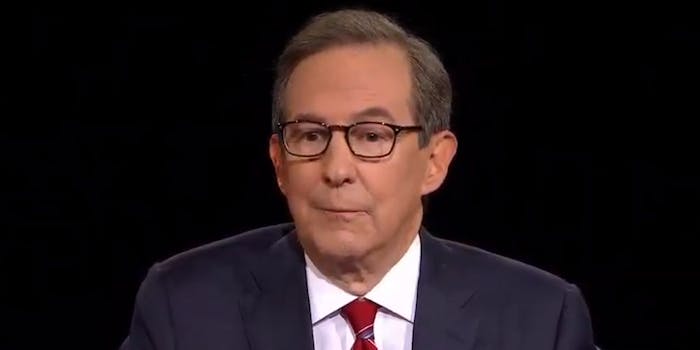 It was astonishingly bad.

Fox News anchor Chris Wallace was tasked with the role of moderating the first presidential debate between Democratic nominee Joe Biden and President Donald Trump. It was one he failed at, struggling to keep control of the discourse Tuesday night.

Wallace was constantly talked over, talked down to, ignored, and he offered nothing more than feeble attempts to take control.

Wallace, at one point in the debate, had to raise his voice over Trump’s continuous interjections.

“No, the answer to the question is no,” Wallace fired back at when Trump was attempting to get in another last word.

Online, over the course of the evening, Twitter users had strong criticism regarding Wallace’s moderating, or lack thereof:

The performance was so bad “moderator” trended on Twitter.

Criticism came from both sides.

Prior to the first debate, Wallace stated that his job was to be “invisible as possible.

“My job is to be as invisible as possible. I try to get them to engage, to focus on the key issues, to give people at home a sense of why I want to vote for one versus the other,” Wallace stated on Fox News earlier in the week.

“But if I’ve done my job right, at the end of the night people will say, ‘That was a great debate. Who was the moderator?’” the Fox News anchor added.