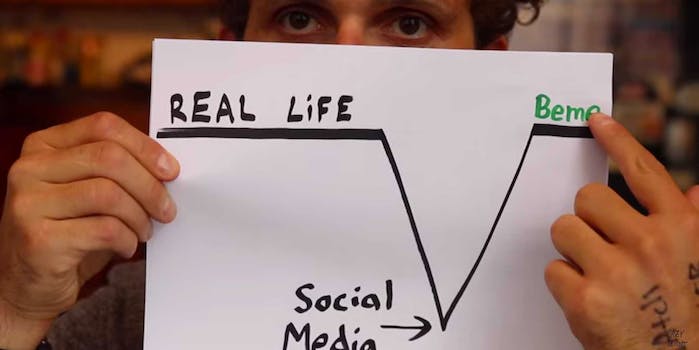 Beme, a new social network, wants you to ditch filters and be authentic

Is life without polish really better?

The idea of social media is to share our lives with others, but rarely does what we share make it to our friends’ feeds without a little touchup beforehand. Posts and comments get rewritten, photos taken dozens of times and run through filters, videos edited and cut down.

Casey Neistat thinks social media is a lower form of interaction. The video artist who has amassed nearly one million subscribers on his YouTube channel wants to remove the facades of social media and make it a more authentic experience. It’s under that pretense that he created Beme.

Pronounced “beam,” the iOS app is like Snapchat without the ability for retakes. Beme captures four-second video clips and immediately pushes them live for all your friends to see. Once the video is viewed, it’s gone—giving the watchers one chance to see the world as you do.

Beme is also changing where we put the camera we use to capture photos and videos. Instead of using the phone’s display as a viewfinder or pointing the lens at ourselves like a mirror for selfies, Beme requires users to place the face of their phone against something: their chest, a table, the wall. Doing so triggers the proximity sensor in the iPhone and starts the recording.

The app doesn’t entirely do away with the much-beloved selfie, though; it’s used in place of a “like” or “heart” button. While viewing a video, users can send a reaction selfie by tapping the screen while watching.

Neistat appears to be nothing but genuine in what he and his team have set out to accomplish. But it misses the mark if its goal is to remove all pretense from our lives. People aren’t self-conscious because of filters, filters exist because people are self-conscious. Retaking photos is no different than changing outfits, applying filters is the same as applying makeup.

People strive to appear as the best possible version of themselves, and many of those measures can make them feel good. It might take 10 tries to get a picture you’re happy with, but when you share it, it’s because you like how you look. There’s merit in that because it makes you feel good.

The aim of Beme is to inject authenticity into social media, and that may well be a noble goal. But there’s no requirement to apply a filter or crop a photo or edit a video on social networks. People choose to do it to present a product that they are more comfortable with. Beme isn’t better because it eliminates that option. It’s a different way of presenting ourselves, but it shouldn’t be mistaken for virtue.