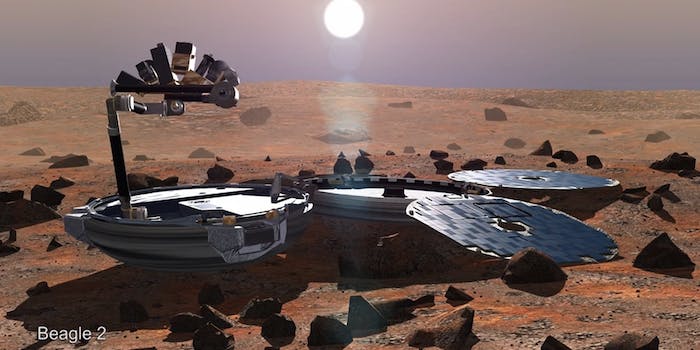 Image screenshot via University of Leicester/YouTube

What once was lost now is found.

The Beagle 2 spacecraft has been found intact on Mars 11 years after disappeared.

The U.K. Space Agency deployed Beagle 2 and sent it toward Mars in 2003, but the craft failed to contact scientists and was presumed to be lost.

Now, new images recently captured by the HiRISE camera on NASA’s Mars Reconnaissance Orbiter (MRO) show that Beagle 2 landed on Mars, but because its solar panels never opened, it could not communicate with scientists.

Beagle 2 was dispatched to look for life and signs of organic matter on the Red Planet. In a video from the University of Leicester, Professor Mark Simms explained that the spacecraft was way ahead of its time in terms of design and ambition for scientific discovery. He also described in detail what Beagle 2 was supposed to do and what the discovery of these images means to the British space program.

Thanks to the new MRO images, scientists now know that the mission was partially successful: Instead of crashing into Mars as they originally thought, the spacecraft landed but its solar panels didn’t unfold all the way. The photos aren’t clear enough to discern how many panels failed or what happened to cause the failure.

Screengrab via University of Leicester/YouTube