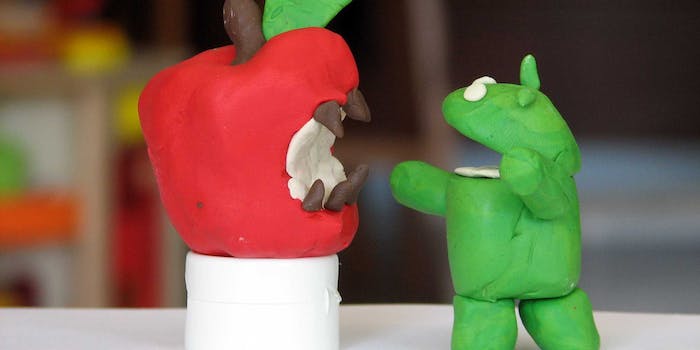 Roommates stab each other over iPhone-Android debate

It's come to this.

The inevitable peak of escalating fanboy forums wars was finally reached in Tulsa, Okla. early Friday morning when two roommates stabbed each other after debating if iPhone or Android was the better mobile platform.

According to Tulsa police, a woman found one of the men covered in blood and stumbling around the parking lot of his apartment complex, probably muttering something about the merits of jailbreaking your phone to himself.

The police say the two men were drinking and began arguing over which mobile OS was best. The conversation got heated and the two came to blows, eventually leading to the roommates breaking beer bottles and stabbing each other. One of the men also smashed a beer bottle over the head of the other.

It’s unclear who instigated the fight, but our money’s on the iPhone owner, because Android tends to take its cue from iOS. (See what we did there?)

Both men were treated for their wounds at a local hospital. The police are unclear as to whom to charge or if charges will be pressed at all because the fact that this whole event happened is punishment enough for those involved.

Here’s a dramatic reenactment of how we believe it went when police brought the two men in for questioning.

iPhone User: This is just like Apple’s TouchID. I just put my thumb on the home button and it unlocks my device.

Android User: Multiple Android devices can do that. In fact, an Android phone did it first. The Motorola Atrix in 2011.

iPhone User: And when did it start to get popular? After Apple did it the right way and made it work.

Android User: Yeah, typical. You and all the other hipsters are so blinded by Crapple’s repackaged, stolen features that you can’t see you’re using an inferior device and paying more for it.

If there is one good thing to come from this incident, it is the final line of Ana Lastra’s report for Tulsa’s ABC affiliate KTUL, which reads, “Police did not respond when our photographer asked which phone is better.”

This story needed a hero, and it has one in Ana Lastra and the KTUL photographer.