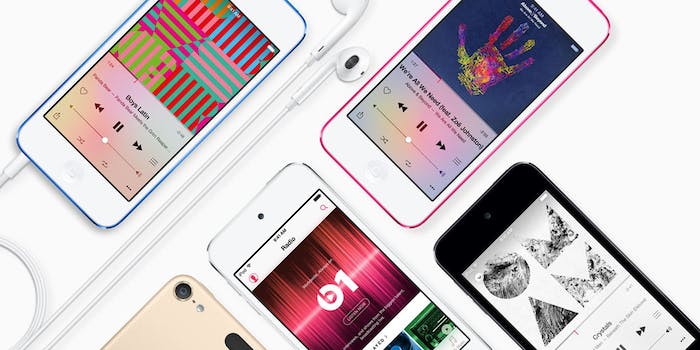 The iPod touch just got a major overhaul.

After years of watching its iPhone and iPad cousins get all kinds of fancy new upgrades, the iPod finally got some love today with a proper refresh that brings new colors, new storage options, and a whole lot more power.

Retaining the same 4-inch display as its predecessor, the 6th generation iPod touch sports specs that blow the doors off its predecessor. The heart of the operation is the 64-bit A8 processor, which is the same system-on-a-chip that powers the iPhone 6 and 6 Plus.

This marks the first time since the iPhone 4 that Apple‘s smartphone and touchscreen iPod have been brought into processor parity.

iTunes diehards and movie buffs will benefit from the new 128 GB storage option for the touchscreen iPod, which has been a demand of iPod fans ever since the retirement of the iPod Classic. The iPod touch’s camera has been updated as well; it now features an 8-megapixel sensor and video stabilization, among other improvements.

The 6th-generation iPod touch comes in a handful of new shades to match Apple’s recent adoration of gold and space gray, along with silver, pink, blue, and red.

Like the iPod touch, Apple’s iPod nano and iPod shuffle have also been given new hues, though the internal specs and design of the devices remains unchanged.