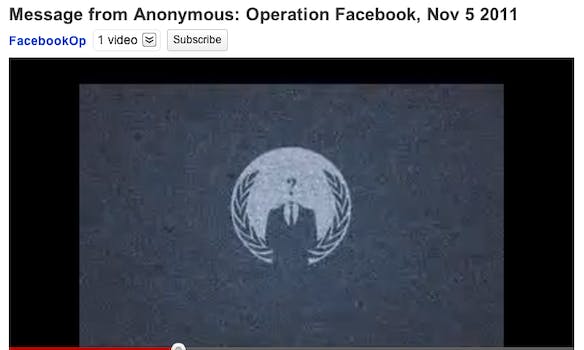 The activist hacker group called Anonymous has been busy honing their skills in preparation for what they promise to be a massive attack on Facebook planned for Nov. 5, also known as, Guy Fawkes Day.

(Fawkes was an English Catholic who tried to assassinate King James I and blow up Parliament on Nov. 5, 1605, according to TIME Magazine. His likeness was transformed into a theatre mask that was made famous in the “V for Vendetta” graphic novel and film.)

“Your medium of communication you all so dearly adore will be destroyed,” said Anonymous in a video posted on July 16. “ (Like its other videos, this one features a computerized voiceover to a screen picture of the groups logo)

“If you’re a willing activist or a guy who just wants to protect the freedom of information then join the cause and kill Facebook for the sake of your own privacy,” the voice states.

Anonymous claims that Facebook is selling user information to the government so it can spy on people but did not provide any specifics.

Facebook spokesperson Victoria Cassady said Facebook had “no comment to provide on this.” According to Facebook’s Privacy Policy, the company can share user information with government agencies “pursuant to subpoenas, court orders, or other requests (including criminal and civil matters) if we have a good faith belief that the response is required by law.”

News about the video and the alleged impending attack has been circulating on Twitter via the hashtag #opFacebook.

In the meantime, the notorious group of net vigilantes spent the weekend hacking the Twitter and Facebook accounts of Colombian politician German Vargas Lleras and the Syrian Ministry of Defense’s homepage.

The Syrian website was still down as of Monday afternoon.

“To the Syrian people: The world stands with you against the brutal regime of Bashar Al-Assad,” wrote Anonymous in a message they claimed to have posted on ministry’s homepage. “All tyrants will fall, and thanks to your bravery Bashar Al-Assad is next.”

Since January 2011, more than 1,400 Syrians have been killed and another 10,000 have been arrested in peaceful protest against the 11-year reign of President Bashar Al-Assad, according to The New York Times. The protests are in response to the state of emergency that’s been in place since 1963, reported Al Jazeera. Under these conditions many constitutional rights, including the freedom of speech, press and assembly, have been suspended.

In Colombia, Lleras, who is currently serving at the Ministry of the Interior and Justice, has come under fire for his support of a law that threatens to limit free speech on the Internet, reported Terra, a Spanish news organization. So in response to this form of censorship, Anonymous placed a Guy Fawkes mask over Llera’s profile Twitter photo.

The hacker group known as Anonymous was founded on the “hacker-friendly message board called 4chan” sometime in 2003, according to AOL news.

The number of members remains unknown but recent arrests have shown that the group is largely made up males in their 20s, reported the Sydney Morning Herald and Reuters. The group has successfully disrupted the services of PayPal and The Church of Scientology.

The group gained some notoriety last December following the imprisonment of Wikileaks founder Juilan Assange. They disrupted the websites of Visa and Mastercard after they stopped accepting donations on behalf on the whistle blowing organization, according to the Wall Street Journal.

So the question remains, what will happen to Facebook come November? Will Anonymous shut it down for a few hours and replace it with anti-Facebook screed, similarly to what they’ve done in the past? And If so, what difference will it really make?

We’ll keep watch over this and other activities.