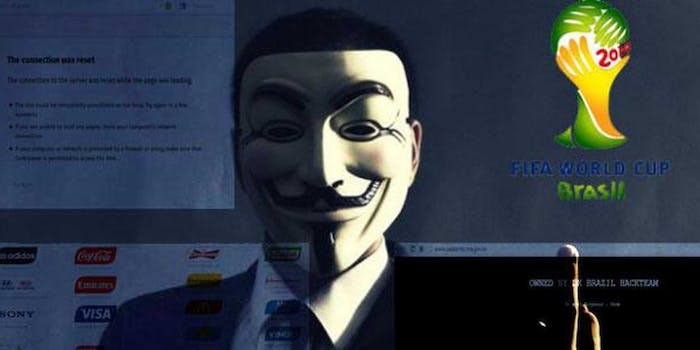 One of these sites is not like the others.

Last week we reported that a branch of Anonymous had announced its plans to attack the World Cup’s corporate sponsors, in protest of alleged corruption in Brazil specifically and FIFA more generally. Yesterday members of Anonymous took down, for some reason, New York’s Board of Elections website.

Hackers News Bulletin reports that the site’s homepage temporarily redirected to the address “http://www.elections.ny.gov/anonbrazil.html” and displayed the following video:

Altogether, it seems that over a dozen websites have been hacked or taken down, including, according to HNB, the site of Brazil’s Department of Justice and Consumer Citizenship and Hyundai’s Brazil-specific website. Still, it remains unclear what, precisely, the New York Board of Elections has to do with anything.