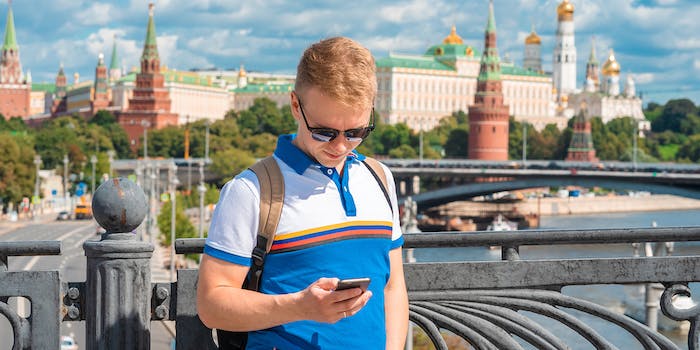 ‘The Kremlin is lying’: Hackers build tool to let anyone text Russian citizens about the war in Ukraine

'Dear Russians, your media is being censored. The Kremlin is lying.'

Hackers have created an online tool that lets users auto-text message random Russian phone numbers with information about the war in Ukraine.

Created by the hacking group known as Squad303, the tool, hosted at the domain 1920.in, loads a pre-written statement into a user’s native SMS app that attempts to inform Russians about the ongoing conflict.

“Dear Russians, your media is being censored. The Kremlin is lying,” the statement reads. “Find out the truth about Ukraine on the free internet and in the Telegram app. Time to overthrow dictator Putin!”

In a statement to the Daily Dot, a member of Squad303 described the effort as a “non-violent communication project” aimed at bypassing Russia’s crackdown on independent news sources. The domain name for the tool refers to Poland’s surprise victory against Russian forces in 1920.

“We know that people wanted to get engaged to help Ukrainians. We wanted to deliver them a tool to start a dialog with Russians,” the group said. “We did not expect that Russia would build the digital censorship wall so fast.”

Russian President Vladimir Putin signed last week a new law that could see those accused of spreading “fake news” regarding the war in Ukraine sentenced to up to 15 years in prison. The decree has caused independent media outlets in Russia, both foreign and domestic, to cease operations over fears of reprisal.

Squad303 claims that its tool has already been used to send out more than 6.3 million text messages, although the Daily Dot was unable to confirm the number.

The hacking group also claimed that its service was targeted by distributed denial-of-service (DDoS) attacks shortly after launch. Squad303’s website has since enabled DDoS protection from Cloudflare to keep its server online.

Users across numerous social media platforms have been sharing their experience with the tool. While many texts are met with silence, some say they’ve been able to converse with Russian citizens.

One user who asked to remain anonymous but provided the Daily Dot with text messages they had made using the tool applauded the project.

While the texting tool appears to be growing in popularity, Squad303 says that it plans to release an entirely new tool within the next 24 hours.

“Tomorrow we will publish a brand new tool to flood Russians with crime evidence from the battlefield even easier than via text messages,” the group wrote. “And it is going to cost nothing.”

The campaign is just a small part of a growing wave of hacktivism targeted towards the Russian state. Ukraine even took the unprecedented step of recruiting hackers across the globe to join its “IT Army” in order to carry out DDoS attacks and look for vulnerabilities in Russian systems.