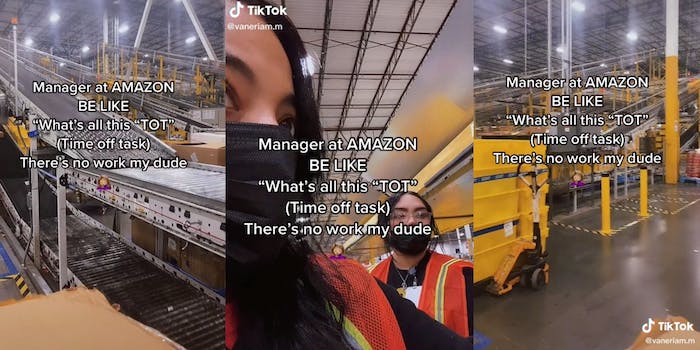 Internal criticism of Amazon's surveillance of workers has increased lately, thanks to TikTok.

An Amazon warehouse worker has gone viral for pushing back against the company’s “time off task” policy in a video recently uploaded to TikTok.

The footage, which has been viewed nearly 50,000 times so far, details TikTok user @vaneriam.m’s experience with being confronted by her managers for allegedly not working.

Yet the video clearly shows empty conveyor belts in the background and no packages to sort, leading @vaneriam.m to argue that “there’s no work my dude.”

“Manager at AMAZON BE LIKE ‘What’s all this ‘TOT’ (Time off task),” a caption on the video states. “There’s no work my dude.”

Amazon workers are constantly tracked and analyzed while on the job, allowing the company to monitor their productivity levels. Time off task refers to a metric that lets the company know when an employee has spent too much away from their assigned job.

Amazon has made multiple updates to the policy over recent years due to complaints from employees that the policy created a culture of relentless monitoring.

“Amazon managers be on some BS!!!!” @vaneriam.m added.

The Daily Dot reached out to @vaneriam.m to inquire about the video but did not receive a reply by press time.

The comments on the video were quickly flooded with responses from other alleged Amazon workers who recounted experiencing similar situations while on the job.

“I got told I had 3 hours of TOT once and I was working the whole time,” one user said. “I used to do the PIT trucks. I quit.”

Other alleged warehouse workers stated that the monitoring likewise caused them to quit the job.

“My favourite response is when you ask them where you can find work and they get upset, glad I quit,” they said.

Some joined in on the conversation to note that they too had quit due to the grueling working conditions.

“Such a crappy job. I quit after a month,” another said. “Picking in the pit machines killeddddd my back.”

Numerous comments merely called on the workers to unionize. Videos from inside Amazon have exploded on TikTok as of late, with countless users sharing their experiences with the tech giant. But the criticism can go both ways. A debate recently erupted on TikTok after a warehouse worker was filmed sleeping on the job.