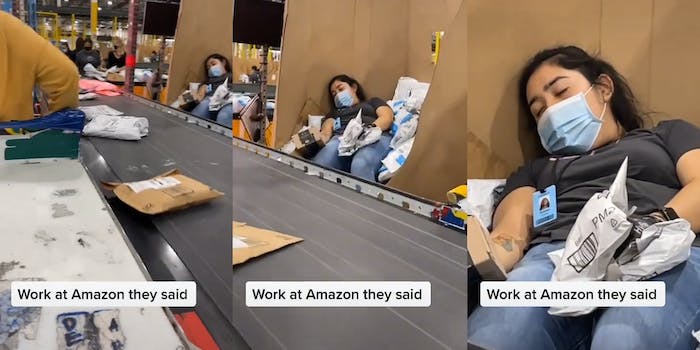 ‘Poor thing was probably fired after she woke up’: Amazon worker filmed sleeping on pile of packages

'She is tired. Doesn’t mean she is lazy.'

A viral TikTok video shows an Amazon worker asleep on a pile of packages, causing controversy about work ethic and labor conditions in the comments.

“Work at Amazon they said,” user @rigo.a_ wrote via text on the video, recording their apparent co-worker asleep from across the conveyor belt.

The TikToker shared this video to the platform twice, with both posts receiving millions of views. Some of the hashtags they included are #workconditions, #amazonsucks, #underpaid, and #unsafe. The TikTok sparked debate about labor and working conditions among many users in the comments.

Some blamed the incident on the woman for falling asleep.

“Generation z does not like physical labor,” one user said.

“How you blaming Amazon because you don’t know how to have a good sleep schedule,” another said.

“No wonder why my package is late,” a third joked.

However, many others empathized with the worker and thought the video was an indictment on Amazon’s alleged working conditions.

“She is tired. Doesn’t mean she is lazy, she may be working long hours, 2 jobs or have a baby who kept her up all night,” one user said.

“Can’t blame her. It’s a very draining job,” another said.

In addition, some Amazon workers shared their own alleged experiences working there.

“I worked nights and have the kids during the day it’s rough,” one user said.

“Working in Amazon is good if your single.I started in nov working ot overnight 6 days I had a 1 year old I had no energy whatsoever … I lasted 1 month,” another claimed.

“I can say I understand.I worked there twice and the pain never end and neither does being tired either .A lot of people fainted from being overworked,” a third said.

“Poor thing was probably fired after she woke up,” another speculated.

The Daily Dot reached out to user @rigo.a_ via TikTok comments and Amazon via email.