Amazon wants to deploy its delivery drones out of blimps

Last week, Amazon received a patent on technology that would prevent its drones from being shot out of the sky. The idea of protecting a drone from a bow and arrow attack seemed a bit far-fetched a few days ago, but a newly discovered patent looks like something out of a sci-fi movie.

Amazon patent filings from April began circulating today that show how the e-commerce site wants to deploy massive amounts of drones from one location: zeppelins, or what Amazon calls “airborne fulfillment centers,” or AFCs. 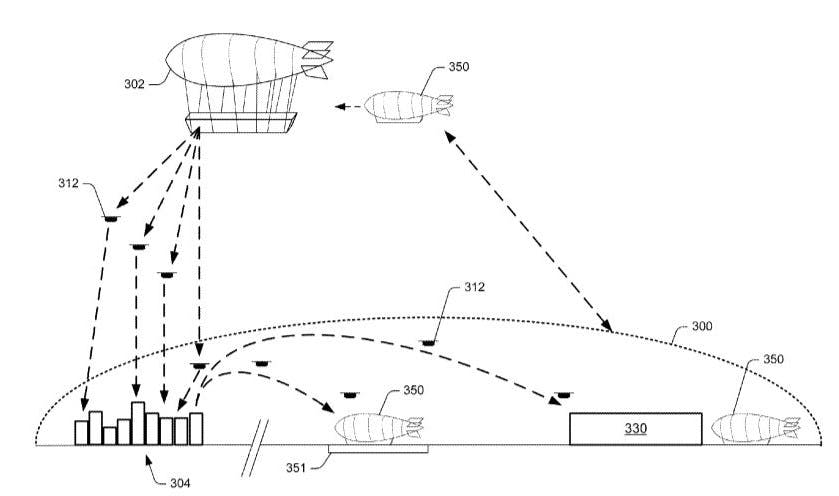 The AFCs would be strategically placed above locations that have a spike in demand. Drones would sit in the airships 45,000 feet above the desired location. Once they received their orders, the UAVs would navigate horizontally down toward a user’s specified delivery location using little to no power, other than to stabilize or guide the direction of the descent.

An example given in the filing said the invention could be used at sporting events, providing snacks and souvenirs to large crowds. It could even complement the venue by being used for outdoor advertising.

The AFC would work in a mesh network like the drones in the anti-bow and arrow example, using machine-to-machine communication to ensure the safety and reliability of the entire system of devices.

Don’t expect to see Amazon-branded blips floating around the skies anytime soon. The company is still testing the viability of using drones, having recently completed its first Prime Air delivery three years after announcing plans to use unmanned drones to send packages to customers. One thing we do know is that the company has some out-of-the-box tricks up its sleeve if it does decide to move forward.