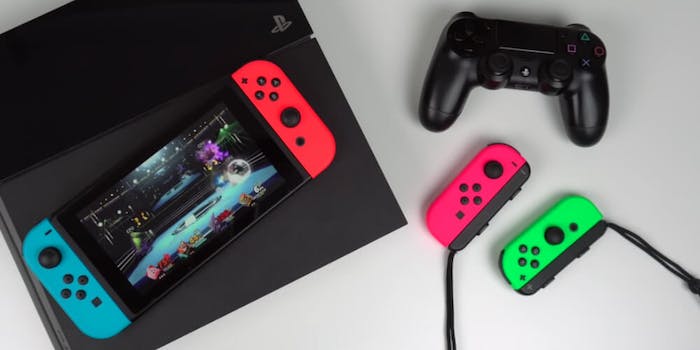 Amazon sends customers condoms and soap instead of Nintendo Switch

One customer contacted the police to investigate the 'fraud.'

Amazon customers in the U.K. are claiming to have received condoms and other incorrect items after trying to order the Nintendo Switch, the Mirror reports.

At least a dozen people who attempted to purchase the handheld gaming system on Black Friday have complained about the bizarre mixup on social media.

One Twitter user wrote to Amazon’s help account, asking if “this is a sick joke” after opening his order and finding a box of 20 Durex Pleasure Me condoms.

Twitter user @paul_addicott reported on Dec. 1 that they received a Lego product after similarly ordering a Nintendo Switch.

“Person at help desk is struggling to understand that the wrong thing has been delivered, with clearly tampered label,” paul_addicott tweeted.

Ordered a Nintendo switch from @AmazonUK and instead they decide to deliver Lego… person at help desk is struggling to understand that the wrong thing has been delivered, with clearly tampered label

Another Twitter user by the name of Sophie Hamilton claims her young son was sent a bottle of “ABS-Like Photopolymer Resin” after spending his birthday money on the Nintendo product.

Oh, @AmazonUK, while I appreciate you may be a tad busy at the moment, we have a severely disappointed child in our house at the moment who has just unwrapped the Nintendo Switch she bought with her hard saved pocket and birthday money!@AmazonHelp #howdidthathappen pic.twitter.com/xmJLjUcJ1e

But it doesn’t stop there. Other Amazon users seeking the Switch say they received everything, from tambourines and bedsheets to electric toothbrushes and AA Duracell batteries.

According to the Mirror, Jenny Breeden from West Sussex even says she was sent the wrong items two times in a row. After finding dog food and soap instead of a Nintendo Switch, Amazon promised to send her the correct item. Except when the second package arrived, Breeden found a packet of air fresheners.

Breeden said she contacted the police as she felt the issue was a clear case of “fraud” that needed investigating.

Amazon has since promised to refund customers, although that means those who purchased the Nintendo Switch on Black Friday will now likely have to pay full price.

It currently remains unclear why those purchasing a Nintendo Switch received random items instead.

According to the Mirror, Amazon has since apologized for the mixup and said an investigation is underway.

“We’re really sorry about that and are investigating exactly what’s happened,” the company said. “We’re reaching out to every customer who’s had a problem and made us aware so we can put it right.”

Amazon is directing any users who have experienced such an issue to contact its customer service team.