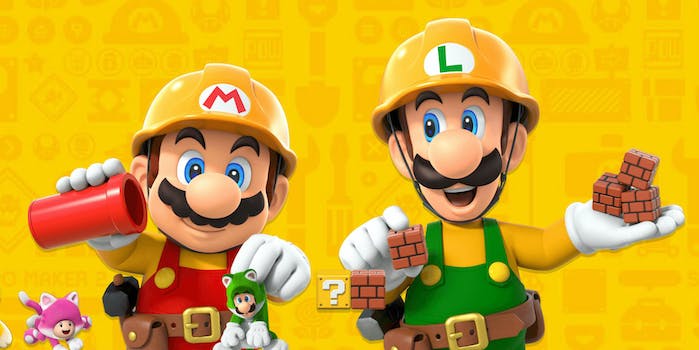 I’ve never flown with Southwest Airlines, so I can’t reasonably make any cracks about its customer service, but I can observe in awe at how well one flight, in particular, was treated today.

While on their way from Dallas, Texas, to San Diego, California, Southwest Airlines treated each and every passenger on board the flight to a free Nintendo Switch and a copy of Super Mario Maker 2.

EVERYONE ON THIS FLIGHT JUST GOT A NINTENDO SWITCH!!! @NintendoAmerica @SouthwestAir #SouthwestxNintendo pic.twitter.com/mUlryf4Kkv

Before long, each passenger on the flight received their copy of the popular gaming console and Super Mario Maker 2, which the Daily Dot’s own AJ Moser called “constantly surprising and impressive,” despite some serious concerns about Nintendo’s online services.

In our best Super Mario voice, we say to you: "Congratulations!" -Adrienne

The flight originally departed from Dallas Love Field and was headed toward San Diego International Airport, according to IGN. Even though it’s unlikely that every passenger was attending Comic-Con 2019, the surprise nonetheless seemed to please everyone on the flight.

Another Twitter user shared a picture of the promotional material included with the free Switch consoles, indicating that Southwest Airlines made its own level just for the lucky passengers. The material also stated that the consoles and games were given out courtesy of Southwest Airlines and Nintendo.

Well this adventure just for better at 30K feet. Not only we got to play a level made for Southwest but we all get a Nintendo Switch. Yes a free Nintendo for each of us. Thank you @SouthwestAir and @NintendoAmerica Super awesome!!! #southwestxnintendo #nintendo #supermariomaker2 pic.twitter.com/wx4POtfnLc

Comic con Miracles happening in the air!! @SouthwestAir gave everyone on my flight to #sdcc a free switch!! Thank you @NintendoAmerica and Southwest #southwestxnintendo

Southwest Airlines and Nintendo have had a longstanding partnership since 2013 when Nintendo became the “official video game partner” of the airline. In 2013, the two companies gave away Wii U consoles and Super Mario Bros. U. In 2016, the companies gifted passengers with free Nintendo 3DS XL systems and Super Mario Maker for 3DS.

Nintendo is one of many companies with booth space at Comic-Con 2019. Check out how you can keep up with all the latest Comic-Con coverage and livestreams.