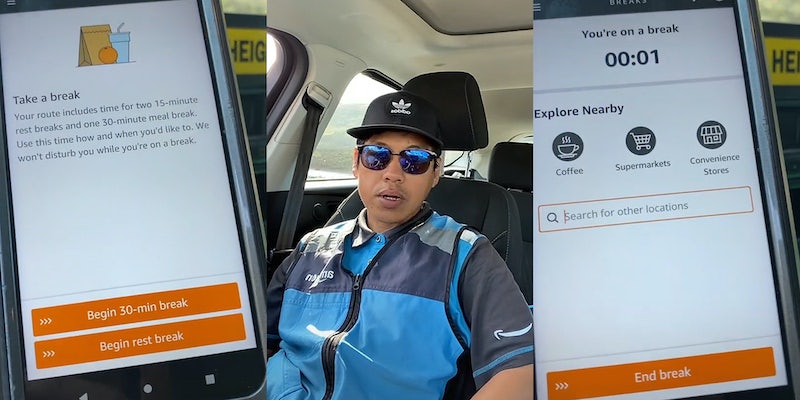 ‘Wrong to make spy software on delivery guys’: Amazon driver shows button he has to press for 15-minute break

'This video made me feel grateful for my life.'

TikToker George (@mudvillagegeorge) regularly shares TikToks about his day-to-day life as an Amazon driver, offering up simple slice-of-life insights and generally being positive and upbeat about what he does.

He also frequently shares clips about taking his break and reminding other drivers to do the same.

“I know a lot of you drivers out there, especially Amazon drivers, don’t take their breaks, but you should. There’s a lot that you can do,” he says in one video. “You can drink cold water. You can look around. Enjoy the scenery. I don’t know, maybe you can call a friend, say hi.”

Footage shared in late July caught the attention of a larger TikTok audience than usual. It features George sliding the “Begin rest break” option on the app utilized by Amazon for deliveries, before showing off that day’s “scenery” as he was parked on the side of a suburban street.

“This route includes time for two 15-minute rest breaks and one 30-minute meal break. Use this time how and when you’d like to. We won’t disturb you while you’re on break,” the text on the app reads.

While George doesn’t appear to have had any intentions of putting Amazon on blast, some viewers weren’t thrilled with the idea that the company has delivery drivers time themselves via the app for their 15-minute breaks.

“The biggest reason why I left amazon though Google offered me lower compensation is that it’s morally wrong to make spy software on delivery guys,” @bruteforcealgo wrote.

It also prompted other alleged Amazon drivers to weigh in on the idea of breaks during their notoriously busy shifts, with many appearing shocked that the TikToker actually took them at all.

“Used to work at Amazon and never took my breaks because Dispatchers would always call or text me saying I was behind and to pick up the pace,” @spectatingyourmom claimed.

The company has come under fire several times over the years as delivery drivers complain about the combination of high expectations and surveillance and how that makes it difficult for them to function throughout the day. Similar complaints have been made about Amazon’s warehouse working conditions.

The Daily Dot has reached out to George via TikTok comment and Amazon via email.