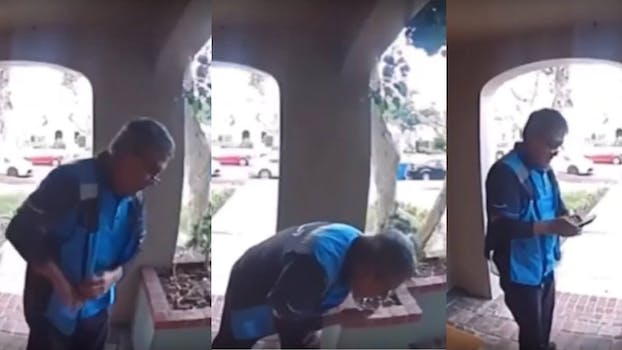 Saliva can be seen falling from his mouth as he rubs the spit into the package with his hands.

An Amazon delivery man has given a new meaning to the phrase, “Handle package with care” after a video caught him smearing his spit all over a package.

On Friday, in the midst of the coronavirus pandemic, TMZ reported on the video of the horrific incident, which occurred on Thursday at a residence in Los Angeles.

The video, which was from a Ring camera, shows a man putting down a package on the porch and proceeding to spit into his hand. He then appears to smear the spit all over the package. Saliva can be seen still falling from his mouth as he rubs the spit in with his bare hands. He then scans the package and nonchalantly walks away.

According to TMZ, the video was shared with Amazon, and a representative verified that the delivery person was from a “third-party service” but could not confirm whether his actions were of malicious intent.

A similar incident occurred two days ago when a woman was arrested for coughing all over $35,000 worth of grocery produce.

Although it was also not confirmed that the driver has COVID-19, many online are still sharing their concerns.

Some users are opting out of using the Amazon delivery service.

“You love Amazon but I ain’t gonna order shit no more. Cuz I just seen a video where an employee spits on the package. Ohh hell nah,” one user tweeted.

Some are urging others to boycott as well.

“How many of your employees spit on people’s packages???#CoronaLockdown#StayAtHomeAndStaySafe and stop ordering shit!!” another user stated.

Many called for the delivery man to be fired.

“So I guess we all need to stop ordering from ⁦@Amazon⁩ because Amazon’s delivery people could be intentionally spreading #coronavirus. ⁦@JeffBezos⁩ needs to take immediate swift action, ” another user demanded while tagging the Amazon CEO.

However, one suggested that the driver’s actions may not have been as malicious as it appears.

“Trying to cause drama on to poor man trying to do his job. Labels get dirty all the time on box packages. It’s obvious he spit on his hand to clean label off to take a pic of the address on the label and one on the porch because those pics have GEO tracking,” they wrote.

An Amazon spokesperson responded to people’s concerns in a formal statement to TMZ.

“This is clearly not representative of drivers who deliver for Amazon and the care they take for customers around the world every day. We are aggressively investigating to understand what may have occurred in this situation. If it truly was a malicious act by the driver, we will be sure he is held accountable, up through and including law enforcement action,” it stated.