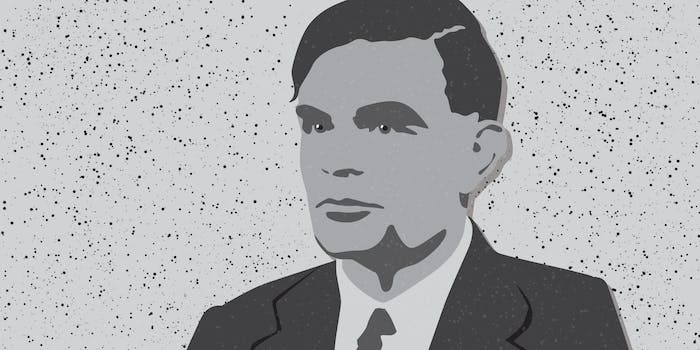 All of the letters are archived and available to read online.

Nearly 150 letters written by Alan Turing, the man who broke the Enigma cipher and is now considered the father of modern computing, were discovered in a filing cabinet at the University of Manchester.

Computer science professor Jim Miles came across a red folder with Turing’s name on the front as he was tidying up a storeroom back in May. “When I first found it I initially thought: ‘That can’t be what I think it is,’ but a quick inspection showed it was a file of old letters and correspondence by Alan Turing,” he told the Guardian. Turing was a reader in the math department before becoming deputy director of the university’s computing laboratory in 1948, and the letters were finally cataloged this month.

While the discovery is nothing short of groundbreaking, the content of the letters offers little we didn’t already know about Turing’s well-documented life. Perhaps the most fascinating revelation is the cryptographer’s hostile attitude toward America.

He responded to an invitation to speak at a conference in the U.S. in 1953 with “I would not like the journey, and I detest America.” Unfortunately, none of the other letters offer more details about his views toward the country.

Most of the collection focuses on Turing’s invitations to lecture in the States, and his work on AI, computing, and math. Of course Turing is best known for leading a team of cryptographers in cracking the Enigma machine, helping allies intercept critical messages sent by the Germans during World War II. However, when the documents were written—between 1949 and 1954—his work was still secret, which is why the code isn’t directly mentioned.

There is a single letter from the Government Communications Headquarters asking Turing in 1952 to send a photo of himself to American cryptographer William Friedman for his history of Bletchley Park, the secret home of World War II codebreakers. Turing said he’d send the photo for the “American rogues gallery.”

Another fascinating discovery is a note dated July 1951 of a draft BBC radio program on artificial intelligence titled “Can machines think?”

None of the letters mention Turing’s personal hardship. He was arrested in 1952 after police discovered he was in a homosexual relationship. Rather than go to prison, Turing chose to endure chemical castration where he received a series of hormone injections designed to decrease his libido. He died of cyanide poisoning in 1954 at the age of 41. His life inspired the 2017 Academy Award-winning film The Imitation Game.

All of the newly discovered documents are archived online and can be accessed for free. You can even search for keywords and read a brief summary of each.