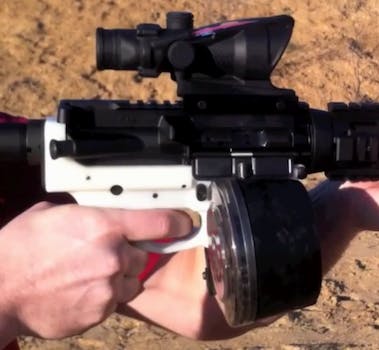 Come and print it: The 3-D revolution starts now

Defense Distributed is now a federally licensed distributor and seller of firearms.

We are one step closer to seeing the world’s first printed gun factory.

The group’s founder, Cody Wilson, gleefully posted a copy of the Type 7 license to the Defense Distributed Facebook page Saturday.

“The work begins!” he wrote—though that’s not exactly right. Wilson told Ars Technica he won’t start production until he receives an “add-on” to the license that will permit the group to manufacture and distribute a broader range of weapons, including assault rifles.

Still, this is a major step for Defense Distributed, which was previously working in a kind of legal gray area. The National Firearms Act requires a license to build and distribute non-traditional firearms, which includes plastic weapons. With a license, Defense Distributed operates without fear of the Bureau of Alcohol, Tobacco, Firearms and Explosives breaking its doors down.

Of course, Wilson’s critics are less concerned with his ability to legally print and sell guns than they are about what his designs, combined with rapidly advancing 3-D printing technology, might do to society at large. 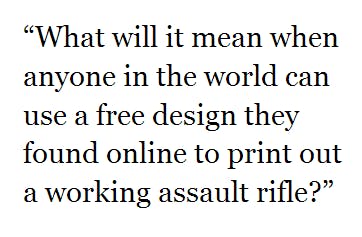 What will it mean when anyone in the world can use a free design they found online to print out a working assault rifle? For some it’s the realization of a libertarian ideal, a radical redistribution of power that favors individuals over governments. For others it’s the beginning of a violent national nightmare, where even the concept of “gun control” becomes an anachronism amidst an impossible-to-control proliferation of homemade firearms.

Defense Distributed is quickly moving the conversation from theory to reality. The group’s search engine for printable parts, DEFCAD, pulls in more than 3,000 visitors per hour, and users have downloaded more than 250,000 files. Earlier this month, it debuted a plastic, printed version of the lower portion of an AR-15 assault rifle, which can fire more than 660 rounds. The “lower receiver” contains most of the weapon’s working parts.

With a firearms license, and assuming printed weapons and components actually sell, Wilson’s may no longer need to depend on donations. That means 3-D gun printing technology, already advancing rapidly, may start move forward with commercial speed. Get ready.