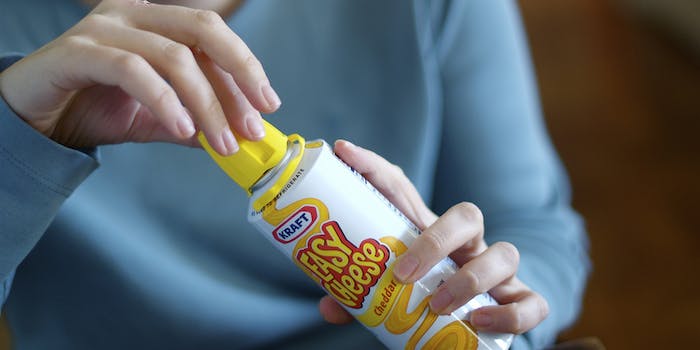 Meet the engineer who’s building a 3D printer for cheese

The results so far? Let's just say there are a few holes.

Andrew Maxwell-Parish is a man with a simple dream: to print designs with cheese.

The engineer and California College of the Arts Hybrid Lab manager has put together plenty of quirky creations of his own, but for two years, he’s had the 3D cheese printer in the back of his mind. He tried to get his students to build it, but no one would.

“Two years ago, two students at the college I work at were building a clay 3D printer that they were showing me one evening,” Maxwell-Parish told the Daily Dot. “The extruder and clay reminded me of cheese in a can. I told them they should build it, but they just laughed.”

Finally, he decided that if he wanted it done right, he’d have to do it himself. Using a modified a Shapeoko mill for the three-axis gantry system, he built the machine that, in theory, would be able to print out 3D shapes using Cheez Whiz.

The results? Not perfect. Even with the advanced technology, the cheese proved to be as unworkable as it likely is indigestible.

“Pretty much the only testing I’ve done so far is in the video,” Maxwell-Parish said, meaning there is no 3D replica of the Eiffel Tower made out of orange goo standing in his office. At least not yet. “I have ideas for the extruder, which maybe I’ll get around to sometime soon. Outside of the slipping-off issue, the amount of force necessary to activate the cheese squirt is surprisingly high.”

Even if the cheese proves to be more malleable to his future adjustments, Maxwell-Parish isn’t exactly sure what he’ll do with the machine. “I guess we’ll see after I get it working,” he said.

If all else fails, he can always borrow an idea from the late Mitch Hedberg: making easy cheese that glows in the dark.

Photo via kizzzbeth/Flickr (CC BY 2.0)