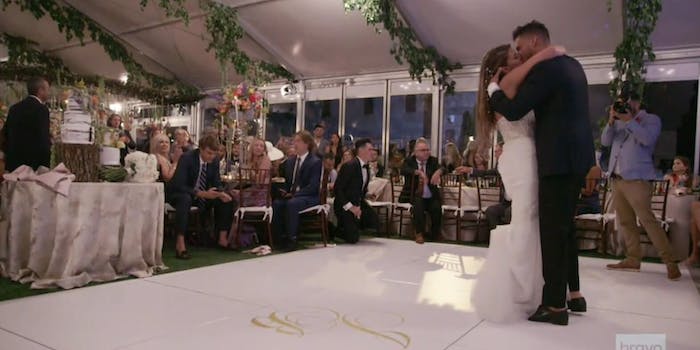 ‘Vanderpump Rules’ recap: The dark side of the honeymoon

You know that the global pandemic is starting to affect me when I’m slightly excited about the wedding of Jax (Jason) Cauchi and Brittany Cartwright.

You know that the global pandemic is starting to affect me when I’m slightly excited about the wedding of Jax (Jason) Cauchi and Brittany Cartwright. Part of me is ready to indulge in some mindless, rom-com bliss. Part of me is just relieved it’s finally here and the season is finally going to move along.

Again, I haven’t seen anyone other than the people I live with or random strangers from a six-foot distance when I go for my nightly sad walks and runs in about a week, so maybe I’m going soft, but… were these vows kind of beautiful?! And it’s not because they think it’s incredible that they both found someone else who likes Friends. (You know, Friends, the wildly popular and universally beloved television show that was on for 10 seasons and has spawned an Anthropologie home goods line. That Friends. Ever heard of it? It’s kind of a cult classic and these two weirdos like it!) Yeah, no, it’s not surprising they each found someone else who likes Friends, but it is surprising that they each respectively think it’s surprising. And that, that complete and utter oblivion is what means they might be made for each other.

The wedding is fine and very lovely. There are sparklers, the couple parades their dogs around, and Hooters girls are on hand to offer guests chicken wings. I also admittedly enjoyed seeing a red-faced Jax scream “I want my fucking vodka” at confused servers during the reception while Tom Sandoval, ever the best man, politely and behind-the-scenes fixed the confusion over cash versus free drinks. Honestly, I feel like I watched this wedding via incessant Instagram posts that invaded my Explore tab this summer, so this is likely all just a months-later rehash for VPR fans.

What many did wonder over the summer, though, was why Kristen didn’t appear in any Instagram posts with her supposed best friends. Last week’s big fight between Stassi, Katie, and Kristen doesn’t surface exactly, though the cause of it does come crawling to Kentucky. Carter, Kristen’s ex, arrives, and as has happened every time he’s been in a season, Kristen starts weeping at the sight of him. I know the rest of the VPR world is Team Kristen here, and I started out that way, too, but this is totally delusional: Why are you fighting with your lifelong friends over a dude who immediately makes you cry when you see him?! Have you considered that your girls might have a point when the thing you’re defending is a constant source of melancholy and angst and public fighting followed by hugging?! During the party following Jax and Brittany’s reception, Kristen seems to be taking measures to avoid Carter, probably because she’d rather have fun and not have whisper fights and cry, which of course, they end up doing. (Why did she beg to bring this guy to Kentucky?!)

While Kristen and Carter end up fighting at the wedding and it becomes more and more difficult to defend Kristen’s terrible decision-making skills, Scheana finally gets her good edit! She’s vacillated between being obnoxiously obsessed with the new SUR and TomTom boy (both of who are sweaty and racist) and sort of hilariously self-deprecating. At the wedding, she’s her best self, without a care in the world, making out with the tallest groomsman she can find.

Wedding bliss can only last so long, and for Jax it ends… when he wakes up the next day. He will not pay a penny more on this whole thing, and as he begins harassing Brittany moments after they open their eyes about getting everyone out of the venue on time, you can see just a glimmer or something in her eyes. Regret? No, no she’ll go down in flames for this man, but maybe just a little reality check is setting in.

Now, this has nearly nothing to do with the episode, but I’ve decided to include as many Randall-related moments as I can, because he is a sweet, overgrown child who brings me joy. While he is supposed to be getting ready, Randall decides to cuddle in bed with Beau, where they talk Bruce Willis movies beneath a fluffy white duvet. Lala appropriately reprimands him, and he 1,000% looks like a kid caught napping in school.

Back in L.A., the uninvited carried on with life. I almost cried seeing Raquel, Dayna, and Danica get together for brunch; it now seems so exotic! Dayna starts right off making apologies for Max, who, let’s remember, she dumped last week and sent him packing with a poop necklace. Now she’s saying she might have reacted too quickly and is considering going back to him. Queue epic eye roll from the world, as excellently personified by Danica.

And there you have it, the first half of the season is wrapped! The trailer suggests that darker days are ahead of us; Schwartz yells cruelly and publicly at his wife, Stassi and Beau fight (but get engaged), and it would appear that Jason slides back into Jax. Who woulda thought? In these uncertain times, at least some things remain.