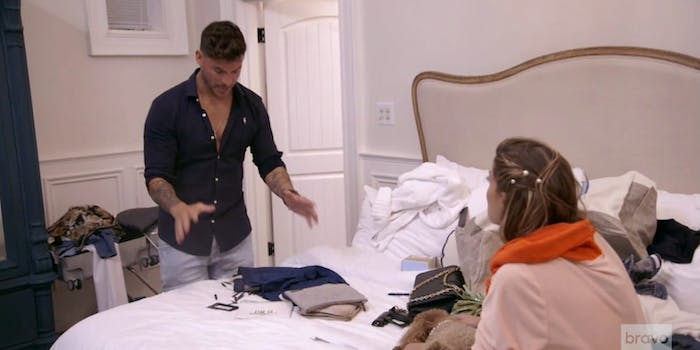 This is only wedding week, and the festivities are being kicked off with a murder mystery party.

Finally, Jax and Brittany’s wedding is here and we can stop dragging this thing out. Just kidding, the dragging out may only commence now: This is only wedding week, and the festivities are being kicked off with a murder mystery party! Wow I’m not even a guest at this wedding and I already hate it so much; I don’t want to talk to members of the local community theater and play detective. I want to eat the free food, drink the free wine, and only talk to the people I already know. Lala and I totally agree on this one.

Moving right along, next we have a predictable stop along the VPR tour: a fight. Stassi, Katie, and Lala take on Kristen, who I began this season defending. Breakups are hard, yes, and harder yet when all of your friends are in stable to stable-ish relationships. But here, on Brittany and Jax’s sacred murder mystery party night, she becomes unhinged. Everyone’s wrong, of course: Stassi and Katie are devoid of absolutely any understanding for Kristen, who is so wounded and fragile that she’s taken on the appearance of a just-born, wet-eyed, wobbly baby deer. Even still, she’s difficult to defend; she backpedals so hard that she starts defending her relationship with Carter, a relationship that is allegedly so awful she’s begged for the support and attention of her friends constantly.

Next, Kristen decides to go find Beau and yell at him, which he (and everyone else) is incredibly confused by. And this is where it begins to make sense that some of her friends are over Kristen. This behavior is exhausting and it’s been going on for… well, eight seasons. They’ve all gone through phases like this; I mean, they used to call her Tequila Katie! But now, the most unstable thing she does is knit. Katie and Stassi are in high school while Kristen is in Brooklyn trying to survive, if you will. They exist in different planets—different solar systems. And the realization of that is harder than the fact of it. But I have to say, while I can’t imagine being as unkind as Katie and Stassi are being toward Kristen, I also can’t imagine ever dealing with someone when as they devolve into a crying, screaming trainwreck.

In happier (happier?) news, during the partying, it’s revealed that Tom Schwartz and Katie… aren’t actually married. Schwartz, predictably, failed to file the requisite paperwork. The revelation is meant to set in motion the upcoming plotline of another wedding in the works: Schwartz and Katie’s actual wedding. The look on Stassi’s face as she realizes Schwartz is not joking is so genuine; this is great television.

Also in happier news: Lisa Vanderpump, who was going to be unable to attend the wedding, hopped on Randall’s private jet and showed up. I clearly have a hardened heart, but even I felt myself soften a bit. Lisa has played mom to Jax since the show began, and while it still seems cruel that he isn’t inviting his actual mother to the wedding, having Lisa there clearly means a lot to him, and even I can acknowledge the sweetness of the moment. Of course, that moment is happening at a wedding meet-and-greet, where the cast are taking photos with fans… which is very weird. Maybe this is how they financed the wedding?

The producers do a lot of work in this episode to humanize Jax; to turn him into Jason: He sits out a night of drinking to sit in bed alone, illuminated by the light of his iPad, watching Friends. And fair enough, old Jax would never. His dad’s urn is brought in and he talks about missing him. I don’t think it’s contrived, but it also doesn’t overshadow the many, many terrible things he’s said in this season alone. Maybe it’s meant to indicate he’s growing? Maybe. But in a confessional, he joking-not-joking refers to himself as the No. 1 guy in the group and knocks Ariana and Sandoval’s relationship, again. And he also finds the “humor” in the fact that after being forced to fire his homophobic pastor, it just so happens to be pride week in Kentucky. Is this a new man? You be the judge.

Again, this wedding weekend (week…month…year…) is the pinnacle of Jax’s lifelong quest to feed his insatiable ego. As the men gather around him the night before the ceremony, slinging drinks, cheersing him, literally bowing to him, chanting his name, you realize… this is possibly the happiest he will ever be.

What else? Ah: This week’s B plot revolves around Dayna and Max, as it has for much of the season. Only this time, it’s incredibly satisfying. Max is outed for “having lunch” with a former paramour. He says nothing more than lunch took place, however, an Instagram photo shows his launch date wearing a (gasp!) TomTom pride shirt—a shirt that Max was in charge of giving out. A shirt that was not even given to Dayna. A shirt which was created while Dayna and Max were dating. Thankfully, Dayna pulls no punches and tells Max point blank that even the fact she has to have this conversation means that they’re done. The girl suffers no fools, and before she kicks Max to curb, she dips his necklace in the toilet and then runs it through her cat’s litter box.

In this house, we stan Dayna.

Next week, a gift: The actual wedding will begin. That does not mean it will end, but at least we’re inching closer to that ledge. Another, unrelated gift is… this GIF of Katie, looking like the girl from The Ring as she cowered in the corner of her hotel room, trying to avoid guests in her room post-poop.

How frightening is that?! Also as frightening as the episode closer, wherein Jax relives all of the terrible things he’s done throughout VPR history. They are many. Will Jax become Jason!? I guess we’ll have to wait until next week to find out… or maybe the week after that?!