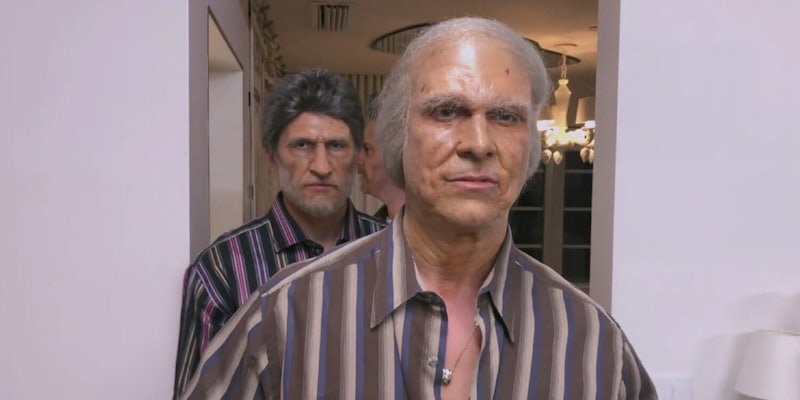 The Miami trip wraps up amid more fighting and plenty of self-delusion.

This week’s episode opens exactly where we left off: With Stassi and Kristen screaming over Katie at Brittany’s bachelorette party dinner in Miami. It becomes very clear they aren’t anywhere close to wrapping this argument up; hell, they aren’t even mid-fight. Poor Brittany makes a plea to salvage the night despite the public ending of a friendship at a strip club, and whilst still yelling at one another, the group heads off to the next location.

The next location happens to be where what I think one of the most charming moments in VPR history occurs: The men dressed in drag for Schwartz’s wedding, and for Jax’s they have hired makeup artists to turn them into old men—the kind of old men who frequent the smoking section of bowling alleys and publicly take out and put back in their dentures. It’s done quite well.

Despite the artistry, the women immediately recognize them and the groups merge, mostly for the purpose of connecting Katie and Schwartz so she can tell him about her fight with Kristen and also that Tom and Ariana had thrown him under the bus as the real issue with Stassi’s book signing at TomTom that had caused Tom (Sandoval) to rage text.

(At one point, Kristen has to take the opportunity to point out that she’s seeing Sandoval as an old man and thus witnessing what she avoided growing old with. We get it, Kristen. You dated Sandoval. And you’re so over it, that you can’t even explain how over it you are! Anyone who so desperately has to point out their friend’s significant other is their ex and assert how truly over it they are is not well. It’s tired.)

Now Katie’s delivery of this information to Tom is not great. They’re both drunk or drunk-adjacent and while she insists she’s not telling him about this for any personal gain, just that he should know, that’s clearly not the case. Sure, she’s defending her husband, but Katie has always been desperate for her husband to align himself with her when pitted against Sandoval and Ariana—and he never does. This time, it seems like there’s hope: Schwartz is legitimately bothered by the idea that he’s been labeled the problem with their business decision.

Of course, when Schwartz confronts Sandoval and Ariana later, even after some very drunk and moderately tense arguing, Schwartz caves. He doesn’t think he caves; he believes they’ve both admitted to wrongdoings. In reality, Sandoval and Ariana have talked their way out of admitting that yes, they did say less-than-complimentary things about Schwartz. Schwartz can’t be sent into an argument with those two alone, they will always prevail! Now I love Ariana and Tom, they are easily the most clever, most entertaining people on this show, but they never just say sorry. A montage proves as much for Sandoval. The “fight” ends with the three of them hugging and I’m waiting for Katie’s eyes to roll all the way back into her head and down her throat when it’s revealed they made up within moments.

The next day, Kristen skips the beach with the rest of the girls to go to the pool with the guys and Scheana. Rehashing her fight with Katie and Stassi, she worries she may have outgrown her friends, or maybe they’re outgrowing each other—to which Scheana promptly agrees. You know Scheana is loving this: She’s tried to fight her way into the core girl group since the first season, to no success. She’s shed many tears over her ill attempts. Whenever someone is on the outs with them, she scoops them up and tries way too hard to form an alliance. Scheana has no subtlety but she’s nothing if not consistent.

Back home in L.A., the B-plot of the episode revolves around Dayna, Danica, and Max. Danica tells Dayna that Max is—gasp! A Bad Guy. The details… uuuuggggghhhhh, they don’t matter, it’s more rumors about him leading women on, and I can’t care. Dayna does not heed Danica’s advice and instead tells Max about the warning. Honestly, I cannot get excited about the new cast or their drama. And it’s not like past additions to the cast have been as uninspiring: In a flashback, we’re treated to a glimpse of DJ James Kennedy, who’s trying to get a gig DJing at TomTom, and while he was a monster, he was VPR‘s monster. He propelled storylines and shot off ridiculous one-liners. He was a king in the confessional. I can’t believe I’m saying I miss James…

The episode ends back in Miami, where the men start removing their movie-grade, old-man makeup. The image of Jax hacking into his own face with a butter knife will haunt me.

The group heads out to party with giant cardboard cut-outs of Jax’s and Brittany’s heads. (Of course, Jax, ambles over to the cardboard version of himself and says he’d like it for his front yard.) Kristen and Stassi make up (which feels temporary) while Katie looks on, holding her grudge.

At the bar, Brittany recaps why she’s able to be so apologetic for Kristen’s non-breakup-breakup: She and Jax have been through so much worse, and look at them now! Perhaps one day, Kristen and Carter will have giant cardboard versions of their heads, too!

Not a lot happened this week if I’m being honest. It’s possible this week’s episode is setting up a fight between Schwartz and Katie—a classic, the Toms-and-Ariana-versus-Katie fight—for old time’s sake. And clearly Kristen, Katie, and Stassi will continue their arguing. But truly, a relatively tame episode for taking place during both a vacation and bachelor/bachelorette party. One thing I have always deeply enjoyed about VPR is the songs solely created to fill time between scenes. These songs do not exist in our world and are just written for the purpose of moving the show along. They are part of the VPR universe only. And this week, the perfect lyrics played as we watched those nights of hard-partying get a little softer.