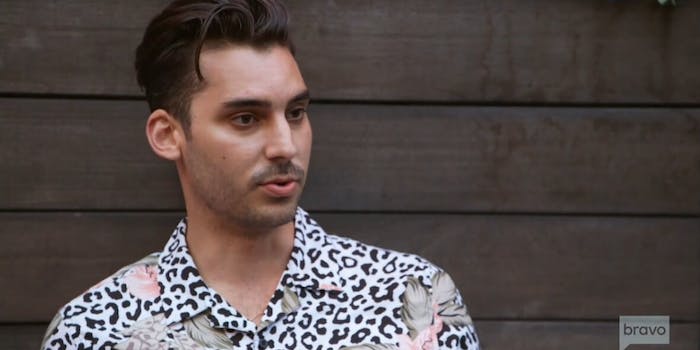 In this week's episode, we learn Charli has never had pasta, among other things.

In this week’s opening scene, we’re greeted with a family gathering between Stassi and Beau and her mother and brother. Last season, Stassi and her mother had a falling out over her mother’s less-than-exemplary behavior, but our new author explains they’ve made up.

And yes, Stassi is a new author: As will be mentioned more times than needed, she wrote a guide to “being a basic bitch.” Not that anyone should expect too much from something described as such, but later at her book signing, she reads an excerpt, and the writing is… not good. I know that no one is looking to Stassi as a figurehead of literature, but I have to admit I was slightly disappointed. And I’m not here to do the “look at these dummies!” thing—I legitimately enjoy this show and find the majority of the cast clever and cunning; perhaps I expected too much! But back to the book signing drama later (none of which focuses on the book itself, don’t worry).

We find ourselves at SUR, where Charli announces she’s never had pasta in her life. She has a theory that pasta makes you fat. Dayna explains this is actually not a theory, exactly, just another way of describing carbs. Later, Charli talks about how her SUR uniform makes her look fat. Charli is hellbent on taking the women of SUR back in time.

(Brief recap on Charli: Charli is the new girl at SUR who we met in episode 1. She is forming an alliance with Scheana and Danica, and the three of them do not like Dayna because she’s seeing Max and also because she eats pasta and doesn’t wear a bra.)

Part of the conversation at SUR serves (hehe) to talk more about Old Brett, who’s the bartender (not the Brett Scheana has a crush on, who it appears everyone is referring to as New Brett). Old Brett is Danica’s ex who asked her to have a threesome. It sort of feels like Old Brett is being set up as the New Jax: A beefy, offensive bartender who’s sex-obsessed and gets into public fights with his girlfriend. Old Brett certainly seems to have a lot in common with Jax, but already I can tell you he’s too deferential and soft-spoken to really fill what I have to imagine are Jax’s oversized Timberlands that have never touched dirt. Later, Danica admits she is sleeping with Old Brett again. I’m sorry, but these two will never be Jax and Stassi; I won’t have it!

(One more aside: The Venn diagram of names in the VPR universe is maddening: We have Danica and Dayna, who look alike—but also, Stassi’s mom’s name is Dayna. Then there’s Old Brett and New Brett as well as the Toms, and Kristen and Katie can get confusing, too. OK, moving along.)

The other important conversation at SUR happens between Lisa Vanderpump and Scheana, who’d come in to talk to Max about his comments calling her boy crazy. Now, between Scheana’s mean girl-ing Dayna and awkwardly flirting with New Brett, almost all of her screen time makes me wildly uncomfortable; I don’t like it, it makes me feel bad for her, bad for me, bad for anyone who has to interact with her. But here, she makes a little bit of sense: Max is downplaying what their relationship was like, and he had a bigger hand in propelling it forward than he’s letting on to everyone else. At the same time, he’s telling her co-workers how clingy she is—it’s classic VPR bro behavior: Bash the women, treat them terribly, call them crazy. He might not be as outwardly douchey as some of the male cast has been in the past, but it’s almost worse that he’s able to move through the same motions more deceptively.

(It also has to be mentioned that Max is absolute trash. Last week, some of his and New Brett’s old, racist tweets surfaced. It’s not like anyone thought we were dealing with social justice advocates here, but the tweets reveal just how little we can expect from these walking Axe ads.)

Anyway: When talking to Lisa, Scheana is lucid, clear-headed, and makes a great point: Yes, there are some romantic feelings tied up in all of this for her, but truly what she’s upset about is that she’s been disrespected. Gasp! Scheana! Yes! Hold on to that and don’t allow your pettiness and your insecurities to overrule what are actually legitimate, logical arguments!

Not possible! Scheana leaves SUR to find Max and confront him.

Max is at a bar nearby having drinks with “the boys.” “The boys”—that ever-evolving, elusive group anchored by the Toms and Jax. Beau, New Brett, and Max are also in attendance. Let’s take a moment to appreciate how different this boys outing is versus in VPR episodes of yore: It is daylight out. Everyone is dressed nice enough, but the L.A. flashiness is gone—any of these men could be running errands at Target before grabbing some Panera for a movie night at home. We hear rumor of shots but don’t visibly see the men repeatedly slamming them as in nights out past. Instead of a boys’ rager, we’re witnessing an age-appropriate, casual gathering for drinks. Refreshing!

A few things of note are discussed: Jax mentions next year’s big party will be his 40th birthday. Max, New Brett, and Jax discuss how “crazy” Scheana is (of course). Tom Sandoval talks about how annoyed he is with Stassi’s upcoming book signing at TomTom (which Tom Schwartz is handling, and has no issues with).

When Scheana arrives, it’s played off as though she’s crashing, as evidenced by this reaction from Beau, our precious angel.

In reality, she and Max were texting and he told her to stop by, a little fact he doesn’t divulge to the group. Instead, he also plasters a surprised look on his face. Max is horrible.

After encouraging the guys to go get some shots and give her some time alone with Max (she does a little shoulder shimmy to boot), Scheana explains that yes, she likes attention from men, but she is hardly boy crazy—and then she puts on her grocery store manager hat and breaks out THE RECEIPTS.

Max’s texts to Scheana are a revelation: This little sociopath was very much a part of a mutual infatuation.

This is the Scheana I love! She’s straightforward, unemotional, and she comes with evidence. Here I am, rooting for my girl, when… she suddenly becomes totally insecure over Dayna and starts asking Max how into the new girl he actually is. Max also does nothing to defend Dayna and is dishonest about his feelings toward her in response to Scheana’s weird inquisition.

Later, Scheana makes a point of letting Dayna know she’s not special or different to Max and it’s all so clearly anchored in her spite over being stiffed by this greasy, racist-tweeting child that I once again, have to jump ship from Team Scheana. I can get behind petty—in fact, I love it; it’s what makes reality television great. But when the content of the pettiness is dull and the attacks are poorly calculated, it makes for a sloppy effect.

So far this season, Scheana is almost entirely involved with the newbies. She’s the queen bee of the all the new SUR girls and finding herself flitting between the new SUR boys, and I’m not sure whether the veteran status is stoking her confidence… or that fact that she’s once again not allowed to play with the big kids is tearing it down. That’s a many-seasons-old story arc. I can still picture Scheana’s birthday party from years ago where she unsuccessfully tried to harass Stassi into coming back. I guess being the captain is great, but my girl is chartering a sinking ship staffed by baby sailors.

And please, VPR editors, do not include any more Scheana moments where she talks about buying Apple Watches and penguins. I beg of you.

Eventually, the day of Stassi’s book party at TomTom arrives. Tom Sandoval had made it clear to Stassi (via rage text) that he is unhappy about the event; the working theory is that Sandoval doesn’t like that Stassi didn’t personally ask him, and he doesn’t take kindly to feeling as if someone else’s success is overshadowing his own.

(Sidenote: Brittany is getting the boring edit this year! And it’s her wedding coming up! Justice for Brittany!)

At the event, Sandoval shows up (after being at the ER for a spider bite…? What?) screaming about the messy situation at his bar… where everything looks very chill. It’s a daytime book signing where most people are drinking Aperol Spritzes and pinot grigios for god’s sake. Stassi and Sandoval end up getting into a screaming match in which they both look bad: Stassi hurls low blows, but Sandoval is unequivocally wrong. In a refreshing twist, Tom Schwartz doesn’t take Sandoval’s side, as he usually does no questions asked. The episode ends with the two bar owners discussing the incident and Sandoval announcing Stassi is banned from TomTom. My dude’s ego is clearly out of control here, and it seems like Sandoval sort of wants the best of both worlds: He wants to pull away from the group and get a house and be a bar owner—to feel different than his friends, who he’s been sidelined by before. But he also wants to keep his friendships tight and keep the group together. Dare I say it? It feels a little as if… Sandoval wants to be the No. 1 guy.

Honestly, I’ve always seen Sandoval as a little kinder and more logical than his peers, but his edit this season is starting to convince me he enjoys feeling a little better than the rest of the group, and anything that threatens that becomes unacceptable to him. Perhaps he’s recognized the competition he and his friends are all in, whether they know it or not: Who will leave SUR the farthest behind!?