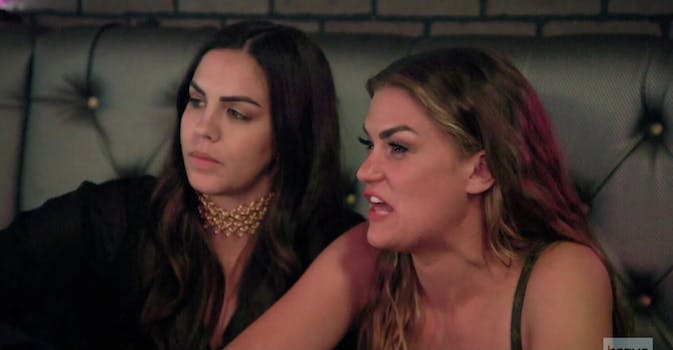 An upsetting episode of VPR makes us think twice about our fave, Brittany.

Vanderpump Rules recap, season 8, episode 7: “It’s Not About the Pastor”

This week’s opening scene is a relatively benign exchange where Dayna and Ariana rehash Pride as bisexual women. It seems like a throwaway conversation, but it sets the tone for what will be, for many, an upsetting episode of VPR. It will also explain the fallout between Tom Sandoval and Jax and Brittany that’s been of much discussion in the Blogs over the last few months.

It finally comes out that the pastor marrying Jax and Brittany is anti-same-sex marriage, and everyone at SUR—who, shall we remember, just finished celebrating Pride—is a combination of confused and upset. The comments are horrendous, and go far beyond tepid anti-same-sex marriage sentiments; his conservative worldview is a hard pill for the handful of our cast to swallow, and definitely an impossible one (a career-affecting one) for Lisa Vanderpump to even touch. She’s staked much of her reputation on defending and advocating for the gay community.

Later, Sandoval reveals that people have been tweeting other offensive things he’s spewed and tagging himself, Ariana, Brittany, and Jax on Twitter… and no one, themselves or anyone else in the group who’s been seeing the tweets, has said anything to the couple for fear of offending them. (Also, shout out to my man Tom Sandoval who is repping a Portland airport carpet T-shirt, doing the lord’s work representing my home town. Sorry but I’m sure none of your international airports have a Wikipedia page for their carpets. Suck it, LAX!)

So where do Jax and Brittany fall on all this? During a post-workout chat, Brittany mildly defends the pastor based on her personal history: She grew up with his daughters, he’s a family man, he’s a good man, she’s known him her whole life, he assured he’s not homophobic. Jax says something nonsensical about how he doesn’t care what anyone believes, people can even pray to cows, as long as they don’t put it on social media. Which… isn’t really the point, but sure.

In her confessional, Brittany explains what longtime Brittany stans (which is pretty much everyone who watches VPR) have always known and not wanted to acknowledge: She’s from the South, she’s a God-fearing Christian woman, and she struggles to align that world with the one she lives in now in L.A. Now, she does not say she agrees with what the pastor says, but she issues something of a defense by saying that people where she’s from believe totally different things and she feels like she’s put in a difficult situation by this.

Now… that’s sort of fair; I can have sympathy for what are likely complicated relationships and discussions with her old friends and family. I can have sympathy, to a point: The larger issue is that both Brittany and Jax suffer from willful ignorance coupled with mild (Brittany) and massive (Jax) narcissism. They’re happy to turn a blind eye, as multiple cast members point out over the course of the episode, as long as what’s going on doesn’t personally affect them. They’ll happily wear rainbows and glitter and party at Pride, but the moment they’re positioned to actually do or say something of substance about an issue they sport like a costume, they cave. It’s more difficult to watch this with Brittany because she’s someone we VPR-heads have always rooted for; we know Jax is beyond reproach, and that when given the option to do the easy thing or the right thing, he’s always going to do the easy thing. (Or the harder thing, honestly, just not the right thing.) And when these “things” are insignificant reality TV fodder, it’s fine. When it’s condemning an entire group of people, it’s not.

Over the course of the episode, Jax and Brittany make a few strange decisions. One, they fire their pastor (good!) and hire Lance Bass (huh?). The former NSYNC boy bander and openly gay pop star has become a good friend, but talk about a hard swing the other direction. It’s like a bad brand tweet: It’s so try-hard, and it reeks of PR involvement, which would be standard if this were a company rethinking a Super Bowl commercial and not two people in love planning their wedding. In any case, they clearly thought the switcheroo would calm their detractors, but Sandoval decides to pull Jax aside and say what everyone is thinking: Sure, you fired the pastor… but why now? We’ve all been seeing the comments he’s made piling up for months. Fired DJ James Kennedy explained it earlier in the episode, and I don’t say this often but go ahead and write it down: Feb. 18, 2020—James was super right.

Now, if Sandoval had said this off-camera, I’m sure Jax still wouldn’t have had a great or normal reaction, but it wouldn’t have set off the fireworks that it did on camera. Sandoval, Jax’s best man, mind you, did the thing you aren’t supposed to do on reality TV, and definitely not on a show you’re on with your best friends: You don’t talk about deeply personal things on camera; maybe in a confessional, but definitely not on set like that. In his defense, he perhaps thought it was on the semi-personal level but not as triggering as it was; but I do tend to think that Sandoval also likes to take the chance to look like a hero. Both things can be true: He’s saying the thing that everyone else is talking about in their confessionals, the right thing, but he is also likely relishing in the fact that he is the Good Guy in this moment. He’ll fall on the sword.

Brittany absolutely loses her goddamn mind here; she wants Sandoval out of the wedding, she wants Jax to punch him, he wants to punch him. Also, moments before, she was crying over mean comments people were leaving on her Instagram account. Brittany’s edit this season is communicating two things: She cares way, way too much about what people online think about her and is falling into the trap where she is hellbent on protecting her image versus being a genuinely good person, and that her sweetness can be matched by her venom. When it comes to the wedding, there are things you do not speak of, and if you do, you won’t only get a cold shoulder from her. You will get hell.

The last time we saw Brittany this mad was when Jax cheated on her, and she forgave him. It’s disheartening to see that her anger doesn’t seem to know limits; the actions of her alleged antagonist matter less than the fact she’s been wronged.

Everyone knew that Jax and Brittany would be wedding terrors, but I honestly can’t believe the lengths they took that privilege to.

In this week’s B plot, Raquel and James are forced to once again reconcile with the fact that their relationship is complicating Raquel’s life. She’s in trouble at SUR and while she’s invited to group activities, she can’t go because James is not and his ego can’t tolerate it. Their argument over this is troubling and confirms yet again that theirs is a deeply unhealthy relationship.

The C plot is that Dayna and Max (who once again says out loud that he doesn’t like that Dayna is funnier than he is) are boyfriend and girlfriend. I hate him so much.

The D plot is Scheana finally identifying that no one listens to her.

This was a tough episode to watch. It’s easy to see Jax selfishly defending himself, it’s harder to see Brittany getting sucked into that operation. But the wedding is only two weeks away, what will happen!? Well, we already know because the couple’s wedding photos were featured in (sold to?) People magazine, and Sandoval is there in the wedding party. (Though he does not look thrilled.) So I guess that means everything is going to get wrapped up nicely, right? At least for appearance’s sake, they are—because clearly, these two need their picture-perfect moment, even if it’s force-fed.