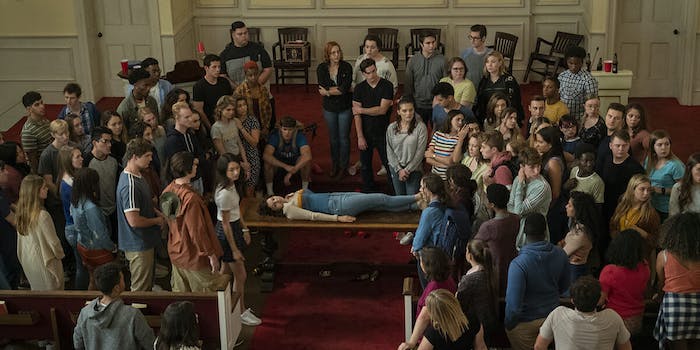 In ‘The Society,’ Gen Z takes a stab at self-governing

Netflix offers a modern take on 'Lord of the Flies.'

In new Netflix TV series The Society, Gen Z tackles systems of government, the accrual of power, and the will to survive.

After turning around from a canceled class field trip, a group of teenagers arrives in a town that’s a duplicate of their own New England hometown West Ham—except all the adults are missing and the roads out of town have been blocked off by a seemingly never-ending forest. At first, that calls for an all-night rager in the local church, but as the days go by the teens realize their parents aren’t coming to rescue them and they have to take charge.

The Society’s first few episodes are hard to enjoy. There are too many characters to keep track of and the show producers relied heavily on stereotypes to set up relationships. There’s the student council president everyone hates but trusts to get things done; the rich guy who expects everything to be handed to him; popular jocks; well-intentioned geeks; and toxic recluses. It’s a contrived oversimplification of young people.

But then the plot gets rolling and the larger themes around the show become more interesting. Netflix has billed The Society as a modern take on William Golding’s novel The Lord of the Flies. In Golding’s novel, a group of British boys are stranded on an island and challenged to self-govern themselves. The novel explores the conflicting values of civilization and self-organization versus a primal instinct for individual autonomy and chaos.

The Society explores that same conflict from a contemporary perspective. If anyone has ever wondered what the United States would look like if Gen Z’ers like David Hogg or Emma Gonzalez woke up one morning and became the de facto leaders of a new community, The Society gives you a glimmer of an idea. In the show, the teenagers start off idealistic and decide to form a socialist society where everyone equally shares the work and food. It works perfect, in theory, as long as everyone agrees to maintain a level of morality. But unfortunately, just like in cities across the world, there will always be people who do not want to play fairly when they feel they are owed more than someone else.

Unlike The Lord of the Flies, the community of self-proclaimed New Ham has to deal with a few new challenges. For one, Golding said he wrote an all-male cast because he didn’t want sex to become a factor. In New Ham, sex is very much a factor that comes into play. Interestingly, women take a natural charge of the town, motivated by a fear of testosterone gone wild. New Ham also has to reckon with the existence of weapons—and it makes a damn good case against arming teenagers with guns.

The large cast of teens is led by Kathryn Newton—who also recently appeared as the lead in Detective Pikachu—who plays Allie, a younger teen who becomes the leader of the new society against her wishes. Newton did an overall good job portraying a young woman who is forced to take on an unprecedented amount of responsibility, making decisions about how to keep her peers alive and how to punish those who threaten their safety.

Unfortunately, the show’s cast lacks diversity and is mostly white. But show creator Christopher Keyser put marginalized voices in the mix, with several key characters who take charge in New Ham being people of color. The biggest standout of the series is Sam, played by deaf actor Sean Berdy. Sam is surrounded by friends who have learned American Sign Language to communicate with him and his storyline goes beyond exploring the life of a deaf teenager. Disabled people are the most overlooked minority in Hollywood, and it’s refreshing to see a deaf actor play a lead in a TV series.

As it explores the clash between self-government and autonomy, The Society provides its characters with a new place with no history of broken systems and an opportunity to create a new structure of co-existing. It is both fascinating and frustrating to watch the teens build an idealistic world and then struggle to maintain their values.