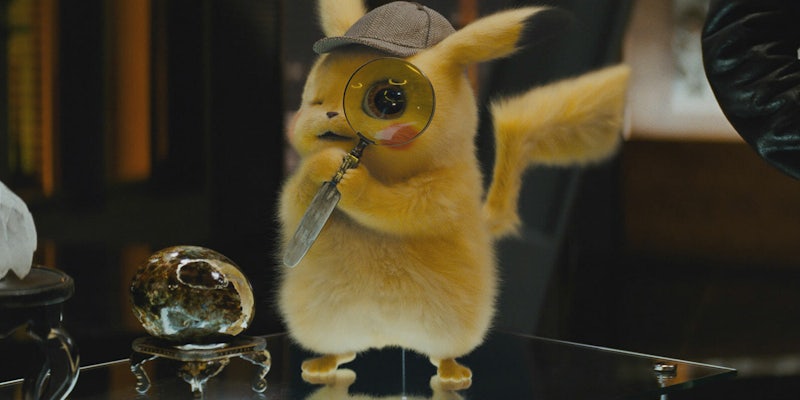 The family-friendly comedy captures the soul of the iconic source material.

When we talk about a “good video game movie,” what do you think of? Do you expect a nonstop clash of CGI ala Warcraft? Do you think of source material that can be summarized on a Post-It note like Rampage? Maybe you look back on Tomb Raider fondly? Let’s not even acknowledge the existence of Sonic the Hedgehog.

RELEASE DATE: 5/10/2019
DIRECTOR: Rob Letterman
This Ryan Reynolds-led effort finds enough heart and soul to win over the grumpy millennials who grew up with the game.

Pokémon: Detective Pikachu will give you a lot of things to think of, even as it veers less toward adult in-jokes and more toward kid-friendly hijinks, but the most important feeling it imparts is the same one I always felt booting up Pokémon Gold back near the turn of the century. I may be young and aimless, but here’s a world I can actually live in, filled with adventure, and some pokémon out there is going to become my best friend along the way.

Listen to Dan Hernandez (one of four writers credited) on Twitter, and you’ll see him explain how he and fellow writer Benji Samit’s only hope at making this thing work was to convince viewers that pokémon are real. They, and of course the effects team behind bringing those pokémon to life, have done that and far more. And so Detective Pikachu is the first legitimately good video game movie. It’s not just “good enough.” It’s not so-bad-it’s-good. It is the first video game film adaptation that not only nails the look of its source material but its soul. All it took was a young man with abandonment issues and a yellow mouse in a deerstalker cap.

The plot works even if it’s messy. A lot of its various arcs are pulled out of film noir, right down to the infamous fake film from Home Alone that was likely some viewers’ first introduction to the genre. Ryme City, at night anyway, is awash in neon light and street vents billowing steam.

Tim Goodman is a lonely young man who never quite made it as a pokémon trainer, and has his reasons for never taking on one of them as a partner, as most in this world seem to do. When his estranged father, a police detective in Ryme City (think Zootopia for pokémon) supposedly dies in a mysterious car crash, Tim is spurred to clean up this last part of his former life, only to run into a wise-cracking Pikachu voiced by Ryan Reynolds. The adorable detective has conveniently inconvenient amnesia (another noir trope), but with Tim’s dad’s name on the inside of his cap, it sparks off a chase across the region to discover what truly happened.

Even for a movie with ninja frogs and fire-breathing dragons, it goes some places you just won’t see coming—for better or worse.

First and foremost, even though there’s a number of times where it’s a little obvious that actor Justice Smith is talking to an invisible co-star, it’s really surprising how much emotional depth is plumbed from the first half of Detective Pikachu. There’s real pathos and a sense of emotional conflict within Tim as he confronts the loss of his father, who effectively abandoned Tim to his grandmother as he poured himself into work. Smith conveys this through some of his best acting, whether he’s putting up walls between him and Ken Watanabe’s police chief character or Reynold’s Pikachu.

Of course, this wouldn’t be a Detective Pikachu review without some comment on Reynolds’ performance. Though it isn’t the extra hardboiled Bronx accent of the modestly successful Detective Pikachu 3DS game, Reynolds manages to swerve between a PG Deadpool riff and his own brand of an emotionally tortured pocket monster. There were plenty of laugh-out-loud cracks, but there were just as many that felt like an editor had asked for jokes for the sake of more jokes. The Lego Movie this ain’t, but there are enough comedic throughlines that pay off so that you can comfortably call this a family comedy rather than a kids movie. All the same, the chemistry that he and Smith’s Tim pull off despite likely never even being in the same room works wonders.

Detective Pikachu begins to amble into its second half as the plot loses itself. In a world where Avengers: Endgame fans are expected to have seen at least most of the preceding movies, the back half of Detective Pikachu feels like we’re missing a few puzzle pieces. Actress Kathryn Newton starts out strong as a plucky news intern hoping to crack the case surrounding Tim’s dad, and while her Psyduck companion is a highlight of the film, she gets pushed to the side too quickly to effectively resolve some threads. There are entire mysteries that get started and solved in the span of a couple of minutes thanks to a handy flashback or hologram, and the final confrontation between the ultimate villain and our heroes is laced with some plot holes so big they threaten to rip apart my understanding of the Pokémon universe’s metaphysical nature, and we’re talking beyond Ash being brought back to life with Pikachu’s tears. The accessibility that the first act achieves in spades certainly gets overshadowed, and even Pokémon fans may get lost in the climax, but it’s ultimately about the thrill ride.

The savior here, as it is throughout this whole movie, is seeing pokémon act as a real part of the world, and all the warm nostalgia that carries. While Detective Pikachu may push the boundaries of what even diehard Pokémon fans can reasonably keep up with, it never forgets that its main mission is illustrating a fantasy world that only feels just the slightest bit out of reach. It’s a world where someone could, in fact, go from sleeping in a Pikachu bed surrounded by poké-battle posters, to working a dead-end job selling insurance, and back to a meaningful relationship with a sentient ball of fuzz. Though Detective Pikachu may be more of a kids film than I hoped for, the film wins by finding the heart of the video game.