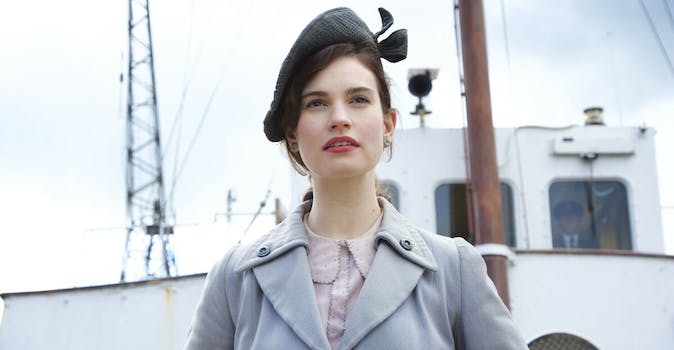 The Netflix WW2 drama is sweet, sad, and romantic.

Shortly after the conclusion of World War II, Juliet Ashton (Lily James) is rebuilding her life even as London recovers from the Blitz around her. A promising young writer, Ashton is in the midst of a book tour, focusing on her burgeoning career as a distraction from the trauma of the war, during which she lost her parents. One day she receives a letter from the island of Guernsey—a quaint, picturesque place formerly occupied by the Germans during the war. The letter writer is Dawsey (Game of Thrones’ Michiel Huisman), a pig farmer who found Juliet’s name in the front of a book he scavenged during the occupation. From that bit of happenstance, Juliet soon sparks a friendship that takes her to Guernsey and into the history of the improbably named Guernsey Literary and Potato Peel Society.

Based on the 2008 written by Mary Ann Shaffer and Annie Barrows, The Guernsey Literary and Potato Peel Pie Society takes its name from an impromptu book club formed by residents of the island in the midst of the German occupation. With most of their food absconded with by the Nazis, the unappetizing pie became a centerpiece of their gatherings, where they read from the books they could find and generally tried to find some joy amid chaos and tragedy. But that tragedy was never far from hand, and the story of one particular tragedy soon captures the imagination of Juliet as she tries to convince the society to let her write an article about their group for the London Times. Their resistance confuses her but also fortifies her determination to learn the rest of their story.

Directed by Mike Newell (Four Weddings and a Funeral), Guernsey is a charming, old-fashioned tale of wounded people trying to pick up the pieces in the wake of the terrible storm that was the second World War. Even in a quaint place like Guernsey—or perhaps especially there—the scars run deep. Everyone there has lost someone, and many of the island’s children—evacuated before the occupation—still haven’t been reunited with their parents, assuming they’re alive. Juliet’s investigation into what happened to the missing member of the Potato Peel Pie Society becomes as much about Juliet trying to find some sense of purpose in all the purposeless tragedy as it does about learning a secret.

James and Huisman are buoyed by a strong, amiable supporting cast, including Eben (Tom Courtenay), who invented the titular dish; Isola (The I.T. Crowd’s Katherine Parkinson), an unlikely bootlegger with an ever-present stash of gin; Amelia (Penelope Wilton), who lost her pregnant daughter to the Nazis; and Elizabeth (Jessica Brown Findlay), the missing member whose story forms the spine of the tale.

By turns sweet, sad, and romantic, The Guernsey Literary and Potato Peel Pie Society is a much more appealing dish than the concoction that gives the film its name.