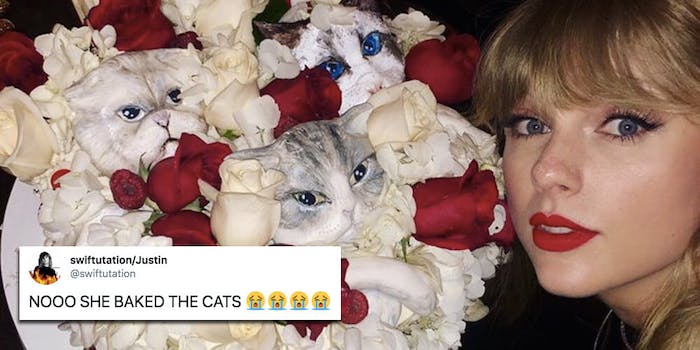 Taylor Swift turned 30 last week, and she celebrated the way any Swiftie could have guessed she was going to celebrate—with cats.

Swift was presented with a giant birthday cake featuring photos of her three cat BFFs—Olivia, Meredith, and Benjamin for those who do not know—while on stage performing at the iHeartRadio Jingle Ball. The cat faces floated alongside dripping pink and glittery letters reading, “Happy Birthday Taylor,” creating a fantastically appropriate presentation for the “Lover” singer.

In case you're wondering… I want my next birthday cake to be this big! 😁 Happy Birthday, @taylorswift13! 🎉#iHeartJingleBall pic.twitter.com/yOrMnUQUYx

And if things had stopped there, everything probably would have been fine. But that wasn’t the only cat cake the birthday girl wound up getting for her celebrations.

Tay-Tay shared a photo on Twitter and Instagram of her real cake… and we haven’t stopped screaming since.

While the Jingle Ball cake was clearly sporting photo representations of Swift’s cats, this new cake features 3D renderings of her furry friends, which are presumably edible. The “cats” are buried up to their necks in flowers and cake as if being prematurely memorialized, while their wide eyes scream for Taylor to save them. If you look closely enough, it even seems as though Meredith is reaching her stubby little paw out from the cake-ground, attempting to claw her way out and save herself.

This vaguely horrifying and too realistic cat cake didn’t go uncommented on by fans, or at least the ones who hadn’t been knocked speechless by that which they witnessed on this fateful birthday.

“I am terrified. Like this is the greatest thing I have ever seen I’m legitimately afraid and in awe,” tweeted Buzzfeed writer Eleanor Bate.

Others pointed out that the cake was nightmare fuel.

i am terrified. like this is the greatest thing i have ever seen i’m legitimately afraid and in awe

I got jitters. Those eyes make you think they are alive. How on Earth did you eat that?

I hope you only ate the roses Taylor

Maybe it counts as catnnibalism?

While no one could ever accuse Taylor Swift of not loving cats, this extreme display of cat lady-hood certainly… took the cake.

“Taylor Swift, aka the ultimate cat person, she loves cats so much she even starred in the Cats movie and wrote songs for it, she had cats in her music video, HECC SHE EVEN BAKED SOME CATS IN HER BIRTHDAY CAKE, can she get an award for her dedication pls!!” Twitter user @Archerpjmn wrote.

And whether you think this hyper-realistic confectionery is the cat’s meow or just a cake version of Pet Sematary, we can probably all agree on one thing: At least Taylor didn’t post any photos of herself cutting into the cake.