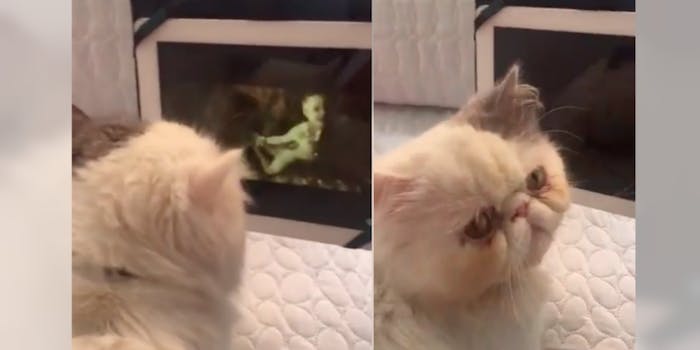 'My cat said 'disappointed by not surprised.''

People have had a lot to say about the “cats” in the Cats movie since the release of its official trailer on Thursday. But, more importantly, what do real cats think of it?

Thanks to a few cat owners who took videos of their cats watching the trailer, we may now know.

Humans were flat out horrified and disappointed after seeing the CGI half-human, half-cat characters in the trailer. It seems that disappointment may extend to our feline pals.

“I showed my cats the Cats trailer,” Janna Layton wrote.

I showed my cat the Cats trailer. pic.twitter.com/tSGVi24Amk

Layton kicked off a trend of humans recording their cats watching “cats” in Cats.

“My cat said disappointed by not surprised,” replied Twitter user Camila with their cat’s similar reaction to seeing the trailer.

my cat said disappointed but not surprised pic.twitter.com/ly5AZ9VyOg

So @PattiMurin asked peeps to film their cats watching the Cats trailer so of course I filmed my dog & he just has the best natural comic timing I’m such a proud parent it’s amazing to see ur children follow in ur footsteps & thrive pic.twitter.com/wRscLaS0CR

Even though the Cats movie helms an all-star cast–including Taylor Swift, Jennifer Hudson, James Corden, and Idris Elba–it may not be enough to save it from the wrath of disappointed humans, cats, and even dogs.

Cats is set to premiere in December of 2019.