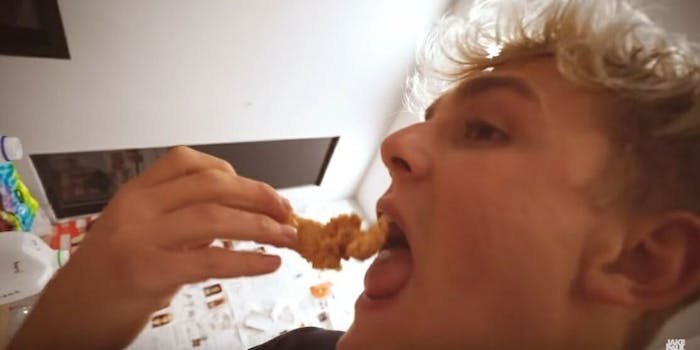 Paul seemed to enjoy the burn.

People apparently love to see YouTube star Jake Paul get owned by major corporations and restaurant chains. This week, it was Pluckers, a Texas-based wing restaurant chain with more than 20 locations around the state, who used Paul to make a Twitter joke and then blocked him when he asked for a free meal.

Walmart found a modicum of online ownage this summer by ripping Paul for selling cheap merchandise. Now, one player in the food industry is using him to give the internet a chuckle, as well.

Paul’s name started trending this week after it was revealed that YouTube star Shane Dawson would release a documentary on Paul later this month, and Pluckers lamented the news with a spicy Twitter take.

oh no jake paul is trending. i'm going to pluckers to avoid that nonsense pic.twitter.com/rkfWiB8rUh

Soon after, Paul followed that tweet with a simple request, asking for a 12-piece chicken meal (something, by the way, that doesn’t exist at this particular chain). Plucker’s response was simply yet savage. The restaurant denied him his request and then blocked him for his trouble.

Aye the person running this account needs a damn raise and a free company car! #pluckers

hahaha for real you deserve a crown

Even Paul loved the burn.

Paul is used to taking guff on the internet. He got ripped for his recent nationwide tour by another YouTuber, he faced a multimillion-dollar lawsuit, and watched as his YouTube incubator group Team 10 fell apart all around him. Yet, he still thrives with 17 million subscribers, and he’s still one of the platform’s most influential creators.

Sometimes, though, that online success just makes him a bigger target for a burn that goes viral.

Deji might have given Paul a bloody nose in their YouTube boxing match last month. But Pluckers proved this week it can deliver a real gut punch.