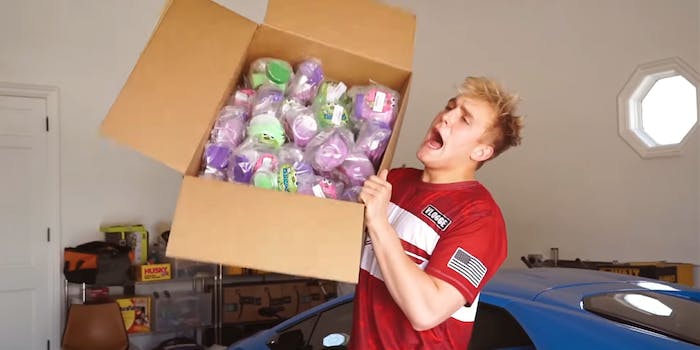 Paul is pushing back.

YouTuber Jake Paul is being sued for allegedly causing damage to a home he rented from May 2016-December 2017.

Paul, younger brother of fellow controversy machine Logan Paul, is reportedly being sued by Cobra Acquisitions, LLC, which owns the Los Angeles property, for $2.5 million in damages. In the summer of 2017, Paul’s neighbors complained about the activities that took place at the house—where Paul filmed many of his “pranks”—including furniture fires and crowds of fans standing outside the home at all hours.

Paul was flippant about the complaints, telling KTLA that while he felt bad, “There’s nothing we can do, though. The Jake Paul-ers are the strongest army out there.”

Paul reportedly left a $40,000 security deposit on the house and by August 2017 was paying $20,000 a month in rent, but Cobra Acquisitions claims it didn’t know his exact profession when they rented it to him. Paul’s rep told TMZ:

There’s no allegation regarding the actual amount of damages other than the request for punitive damages. That’s because the damages were minimal compared to the amount they’re asking. They say they want punitive damages because they say they didn’t know Jake would use the house for his pranks, but the original lease states it’s for Jake’s personal use.

The lawsuit, filed Friday in Los Angeles Superior Court, alleges that occupants of the house did extensive damage, “including lighting fires in the backyard, filling the pool with cereal, draining the pool and lighting a fire in the pool, hosting parties at the roof, installing a trampoline on the roof, and making holes in the interior walls of the Subject Property.”

Paul was sued last fall for allegedly causing damage to a man’s hearing after Paul and his associates surprised him with an unnecessarily loud car horn.